by Mark Boyer
Prev NEXT
5 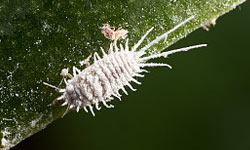 Perhaps the No. 1 area in which humans get parasites to do our dirty work is out on the farm. As anyone with a vegetable garden will attest, insect pests can wreak havoc on everything from fruit trees to squash, and they cause billions of dollars in crop losses each year. To deal with insect problems, many conventional farmers opt for the nuclear option, spraying their fields with poisonous insecticides. The problem: Chemicals that are poisonous to tiny creatures like insects are generally bad for humans, too. But one of the few non-toxic weapons that farmers have in the fight against crop-killing bugs is parasites.

Natural biological control isn't exactly a new technology -- it has, of course, been around for millions of years -- but employing beneficial insects to keep pest populations down is a relatively new practice. Some "beneficials" are merely predators, and they simply prey on the insects that are harming the crops. Others are parasites, which have a different and often creepier relationship to their host.

Aphids, small lice-like insects that reside under the leaves of plants, are some of the most harmful pests faced by fruit and vegetable farmers. They can be attacked using insecticides, but natural parasites can often be even more effective, because they have the ability to seek out aphids that might somehow avoid the spray. One such example is the Aphidius ervi parasite, which sneaks up on unwitting aphids, lays an egg in them, and then once the egg hatches, the larvae consumes the aphid from the inside out [source: Arbico Organics]. Now, that's a type of biological warfare we can get behind!

Parasites are often employed as a last resort, like in Thailand in 2010, when a massive infestation of invasive mealy bugs threatened that country's cassava crop [source: Than]. When no other pest-control methods worked, farmers engineered a sting operation, bringing in parasitic Anagyrus lopezi wasps, which, like the aphid parasites, lay their eggs right inside the mealy bugs' bodies. (Notice a theme yet?) Thai officials responded swiftly, and the parasites were very successful in controlling the mealy bug outbreak [source: Bellotti].