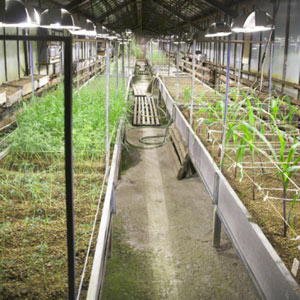 According to the United Nations' World Food Programme, 1.02 billion people don't get enough food every day to be healthy. The UN identifies hunger as the worst health risk worldwide, greater than disease and war [source: World Food Programme]. Could science eliminate this problem?

It's a complicated question to answer. Theoretically, agricultural biotechnology might be able to produce enough nutritious food to meet world hunger needs. But in practice, it might not work.

Agricultural biotechnology is a collection of disciplines and tools meant to change crops on a genetic level. Scientists insert genes from one organism into the cells of a target crop. If everything works as it should, the target crop will develop the particular feature for which the gene is responsible.

Genes determine an organism's traits. Some organisms have traits that would be advantageous to others. For example, a type of bacteria might have a natural resistance to cold temperatures. If scientists can identify the gene that gives the bacterium this ability, they might be able to introduce the gene into another organism such as a type of corn. The corn plant might then also develop a resistance to cold. That means farmers could grow such a crop in a wider range of climates than the original strain.

Agricultural biotechnology has the potential to give crops other advantages as well. Not only can scientists develop plants that can grow in a wide range of environments, but also increase a crop's yield and nutritional value. It's as if the scientists are building super crops that have the best traits in nature. The same process happens naturally, though it's much slower, normally limited within the members of the same species and not as precise.

While the procedures in agricultural biotechnology are precise, the process takes a long time. Not every experiment is successful. And some governments -- including the federal government in the United States -- place tight restrictions and regulations on crops developed through agricultural biotechnology. Scientists must demonstrate that their processes are reliable and safe before genetically modified food can hit the market.

Assuming that scientists develop genetically modified crops that could produce enough food to feed the world, would that solve the problems of world hunger and famine? It's a bit more complicated than that. Let's take a look at some of the obstacles humans face in the quest to end world hunger.

Let's say that scientists have developed techniques and crops that can yield enough food to feed the world. What other problems stand in the way of ending world hunger?

One hurdle to overcome is commercialism. The companies developing agricultural biotechnology techniques aren't necessarily doing it out of altruism. Some companies seek patents on specific genes. That means anyone who wants to use that gene must license it from the company holding the patent. This gets complicated and expensive very quickly.

Another problem is that the companies developing biotechnology tools aren't necessarily in the countries that would benefit most from the technology. In order for biotechnology to help these countries, there would need to be a transfer of technological knowledge and equipment from one country to another. While some organizations might share knowledge in an effort to help other countries, that's not a common business practice.

The focus of agricultural biotechnology up to this point has been for mass commercial farming for the most part. That sort of focus doesn't take into account the subsistence farmers who would benefit from access to this technology. Some nonprofit organizations are looking at ways to use agricultural biotechnology on a small scale for subsistence farmers but they are the exception rather than the rule.

In the United States, farmers aren't required to label their products if they've been genetically modified. But in other parts of the world, most notably in Europe, restrictions are tighter. Even if we develop the tools that could help us grow enough food to feed the world, fears about health hazards or environmental impact could slow any distribution of the food or the technology behind it.

Learn more about agricultural biotechnology and related topics through the links on the next page.

Famines aren't limited to the developing world. Weather, disease or a change in population can lead to a famine. Because famines aren't necessarily predictable, we may never be immune to them.

Have We Hit the Peak Recycling Point?
Could Salter's Duck have solved the oil crisis?
How Glaciers Work