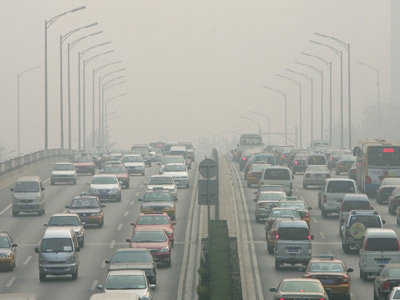 Our hearts as well as our lungs have a hard time dealing with particulate matter -- like the pollution that hovers over Beijing.
AP Photo/Greg Baker

­A recent study, published in 20­08, found a reason why hearts seem to react so badly to air pollution: Particulate matter can interfere with the heart's electrical system [source: Science Daily].

The heart muscle pumps blood by contracting, squeezing the blood within its arteries to force it into the rest of the body. Just like any other muscle, the heart's contraction is triggered by an electrical impulse. In the heart, the impulse is generated by the SA node attached to the right atrium. The rate and rhythm of this impulse determines the heart beat, or pulse (see What determines the rhythm of your heart? to learn more).

Harvard University scientists studied 48 heart patients after they left the hospital, and tested their heart function after having been exposed to Boston air after weeks and then months. What they found was a change in heart conductivity, called ST-segment depression. ST-segment depression is essentially a reduction in the heart's ability to conduct electricity.

What does this mean for those of us breathing polluted air?

The short of it seems to be that an already damaged heart is more susceptible to the effects. In people with atherosclerosis (clogged arteries), air pollution has actually been shown to speed the rate at which plaque builds up on artery walls. Still, while people with healthy hearts are less at risk for cardiovascular trauma related to air pollution, we all feel the effects. The AHA estimates that, on average, we could all be losing one to three years of life expectancy due to pollution-related heart issues [source: AHA].

The good news is, we can still do something to stay healthy while the world's governments slowly get around to fixing the air-pollution problem. We can all try to follow the guidelines given to heart patients: avoid heavy traffic when possible, stay indoors on the worst air-quality days, and, of course, get the heck out of L.A.

­For more information on air pollution, heart health and related topics, look over the links below.