The Ultimate in All-terrain

by Cameron Lawrence
Next 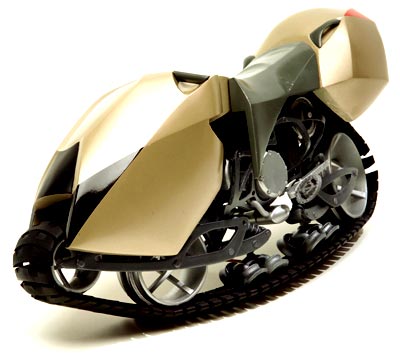 It's no secret that we love cool gadgets and crazy vehicles here at HowStuffWorks, and today Popular Science dished up an article on an especially cool all-terrain motorbike: the Hyanide.

The brain child of two German designers, Oliver Keller and Tillman Schlootz, the Hyanide raised eyebrows at this year's Michelin Challenge Design held in California. The designers aimed to create a personal vehicle capable of performing the tasks of a dirt bike, snowmobile and a four-wheeler -- the ultimate in tackling nearly any terrain with a single vehicle.

Instead of tires, the Hyanide has a track of rubber tread, like a military tank, that's bound together by Kevlar rope. Underneath the rubber are hard plastic plates, and according to the Popular Science, each segment is designed to flex independently to increase traction and the vehicle's ability to make sharp turns. The Hyanide's design requires it be steered by both the rider's hands and feet; the bike bends into turns, which makes turning sharp corners a much more efficient action.

Popular Science explains how the steering system would work:

Let's all take a minute for a reality check. At the moment, the Hyanide is only a concept model, existing in one-fifth its intended size. And worse news still, the Hyanide will exist only in our daydreams: its designers don't have any plans to bring one to the consumer market. You never know, though; crazier things have happened. (link)