One Possible Future for Corn 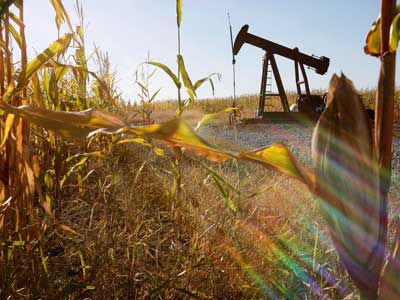 An oil well operates in the middle of a cornfield. Will engines of the future depend on either of these sources?
Scott Olson/Getty Images News/Getty Images

A lot of the world depends on U.S. corn exports, and it doesn't take a genius to realize the potential dangers of the corn sector catering increasingly to the ethanol industry. The more corn that's grown exclusively for the biofuel industry, the less there is to feed people and livestock.

­Biofuel manufacturers and advocates attempt to dispel these fears by saying that their industry is ­still in a very early stage. They point to a future where, instead of turning potential food crops into fuel, we'll process inedible agriculture waste. If this happens, corn ethanol of the future may be produced from stems and stalks, while the actual corncobs go on to feed hungry mouths.

Others argue that future biofuel called cellulosic ethanol will be made from fast-growing trees and switch grass. Critics of this move, such as Eric Holt-Giménez, director of the Food First Institute for Food and Development Policy, contend that this approach amounts to more of a "faith in science" than actual science, and that the sustainability of cellulosic ethanol isn't a foregone conclusion. Cellulosic ethanol is still several years and various technological advancements away -- and even then it might not give us the carbon savings we're hoping for. Holt-Giménez says that, by perpetuating the idea that second-generation biofuels will save the day, manufacturers make it socially acceptable to pit fuel production against food production.

Whatever we choose to do in the long run, there's still the short-term possibility of a depleted global corn supply to consider. Amid government subsidies for corn farmers and recent rising crop prices, some foresee a future where our dependence on corn breaks us, while others predict that it will be the corn industry that goes bust.

Toward the end of 2008, the corn industry seemed more inclined to bust. Corn futures took a sharp dive, landing nearly 51 percent below their all-time high in June of the same year. Analysts placed the blame on several factors, including a fall in crude oil prices, which had reached an 18-month low, and hurting demand for alternative fuels [source: Inside Futures].

Still other corn critics predict that concerns over rising health care costs will force a large-scale dietary move away from high fructose corn syrup, which accounts for 10 percent of the calories Americans consume [source: Christopherson]. Factor in the milled corn in junk food, and corn products stack up to be a leading cause of obesity and diabetes. Even if Americans don't rise up against junk food, there have already been rumblings that major soda manufacturers may switch from HFCS to sugar, due to corn's costs and sugar's greener profile [source: Rano].

The ethanol industry hasn't depleted global corn supplies yet, but it has put a strain on them. Going forward, the industry faces an uncertain future. Is cellulosic ethanol right around the corner? Will the ethanol industry continue to slide due to lower demands? Only time will tell.

Explore the links below to learn more about ethanol, corn and the global food market.­