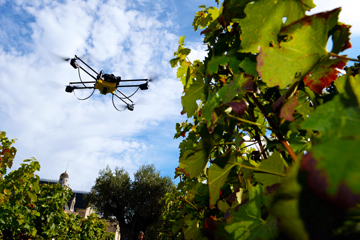 There was a time when a farmer who wanted to grow his own food had to go out there and plant and harvest the crops by hand. Or get someone else to do it. Just about the only thing that folks from earlier generations down on the farm like talking about more than tales of walking barefoot for miles in the snow to school every day is just how back-breaking strenuous agriculture work can be.

These days, advances in modern technology have helped revolutionize the agriculture industry and make the work of planting and picking a whole lot more efficient. From robotic cow-milking stations and electronic cattle tagging devices to irrigation apps and driverless tractors, life on the farm has become a high-tech affair. Some of the newest tools in the shed are low-cost drones that farmers are relying on to take much of the guesswork out of the agriculture business.

Not all drones are alike. Those pilot-less planes that are increasingly doing the heavy lifting in international war zones are drones, yes, but so are the strange miniature flying machines that you may find whizzing around in your local park or perhaps on your next trip to the White House. Agricultural drones tend to look more like the hobbyist type, small quadcopters that hover in the air with the help of a series of tiny propellers. They typically fly themselves, using a global positioning system (GPS), and are equipped with a point and shoot camera [source: Anderson].

Most farmers who use drones send the flying devices high up over their plots of land, where the machines take clear, rapid-fire photos of the fields below. Unless they have access to a plane, helicopter, hover board or some other flying mechanism, farmers with drones a view of their land that they've never before seen. Many of the devices are designed to communicate with software that uses the aerial shots to create a high-resolution map with detailed information about what's going on with crops [sources: Anderson, Runyon].

Among other insights, drone photos and mapping systems can tip farmers off to irrigation, soil and infestation problems. The machines also feature infrared technology used to map out distinctions between healthy and damaged crops. Over time, an array of drone photos gives farmers a good picture of how their crops are changing and whether various farming methods and techniques are actually working [source: Anderson].

This information can save farmers money. It gives them the opportunity to inspect and address diseased or infested crop areas before problems spread elsewhere. It also allows them to limit treatment to trouble areas, rather than shelling out the cash to treat an entire crop. That's a lot of bang for just a few bucks: Smaller drones can run about $1,000 a pop [sources: Anderson, Runyon].

The hardest part to getting a farm drone up and running in the United States appears to be the required Federal Aviation Administration (FAA) approval process. Drones can do many things, but they haven't yet been designed to fill out paperwork and deal with government bureaucrats [sources: Anderson, Runyon].