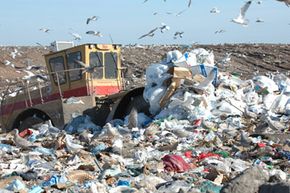 Landfills around the world are overflowing with the refuse of daily life. See more green living pictures.
Photo courtesy of Onslow County

Somewhere in the world, a recyclable aluminum can is tumbling into a landfill.

Actually, 50.7 billion cans are tumbling into landfills every year, and that's just in the United States [source: Allegheny]. Despite the availability of recycling programs, people are still tossing "garbage" at an alarming rate -- more than 4 pounds (1.8 kilograms) per day per person, or 56 tons (50 metric tons) per year, for the average American trash producer [source: CAC]. And not all of that trash even could be recycled if it were tossed in a different bin.

Landfills around the world, but especially in the United States and China, are overflowing with the refuse of daily life. Trash is beginning to overtake oceans, too -- there's a garbage patch in the Pacific that measures somewhere between the size of one or two Texases (see Could we clean up the Great Pacific Garbage Patch?). And most of the refuse there is recyclable plastic.

Recycling is great, but it's not solving our garbage problem. It's not even coming close. Americans produced 60 percent more trash in 2005 than they did in 1980, and that trash has to go somewhere [source: GL]. Lately, more of it is going into compost bins, where it's turned into fertilizer. But that's just the organic waste. You can't compost plastic bags or broken microwaves.

Enter the handy bacterium. Bacteria, or microbes, already work on trash 24 hours a day. Their activities are how trash "decomposes", whether in a landfill or a compost bin, bacteria digest it. Lately, this fact of nature has picked up steam as a possible solution to our garbage problem, and a few new ideas look promising, if only in theory. In this article, we'll look at some of the more recent bacteria-focused proposals in the garbage fight. We'll find out what they entail, how much good they could do and where they are in terms of real-world viability.

One major area of research addresses the fact that, despite what you might have heard, plastic actually does decompose. It just takes a long, long time. 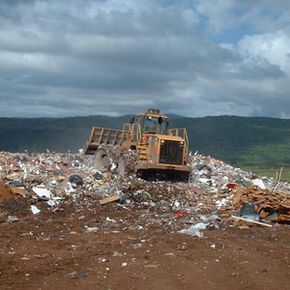 Trash that might not degrade for millennia piles high in Kaua'i County, Hawaii.
Photo courtesy of County of Kaua'i

While plastic isn't really around forever, it might as well be. It typically takes thousands of years for the stuff to decompose under normal landfill conditions, which means every piece of plastic ever thrown away is still around in its original state, more or less.

Of course, some of the used plastic -- say, a water bottle -- is still around in the form of new plastic -- perhaps an eco-friendly lawn chair. Recycling means less "virgin plastic," which is a huge plus. Unfortunately, only a small percentage of water bottles are recycled. That's partly because people are throwing them in the wrong bin. But it's also because recycling plastic is difficult, energy intensive and not terribly profitable, so there's not a big capitalist push to get all those bottles into the right bin.

If recycling plastic were easier and more profitable, landfills would be growing at a slower rate. One of the more recent innovations in bacterial trash management helps us get there, with an additional perk: recycled plastic that's biodegradable.

The typical result of recycling PET plastic (the millennial degrader) is PET plastic. The upside is that it's not new plastic. But it's still going to be around for thousands of years. A new bacteria-based recycling process converts PET plastic into PHA plastic, which is both biodegradable and more economically valuable than PET.

Researchers at University College in Dublin, Ireland, discovered that a strain of bacteria called Pseudomonas produce PHA when they feed on components of PET. Basically, when PET plastic is heated anaerobically, it breaks down into three things: terephthalic acid (TA), oil and gas. When a Pseudomonas bacterium digests the terephthalic acid, it fills up with PHA plastic.

PHA is used in various medical supplies, mostly. It's expensive stuff, which means it can make recyclers a lot more money as an end result of the process. And even if some of that end result does end up in landfills, it'll degrade a lot faster than the original PET input.

Another new bacterial process produces nothing of real substance -- at least nothing that would collect in a landfill. A 16-year-old in Canada discovered a combination of bacteria that breaks down plastic bags into water and a bit of CO2.

An annual 500 billion plastic bags around the globe, each one taking millennia to breaks down, is significant landfill filler [source: Kawawada]. Daniel Burd's science fair project successfully isolated the bacteria that eventually break those bags down: Pseudomonas and Sphingomonas. Working in concert, with some sodium acetate added to the process, the bacteria digest down plastic in practically no time, a matter of months, not millennia.

Neither new approach is ready for commercial application. They're potentially scalable for broad use, but that'll take years of development. Another angle on bacterial trash management might be farther along, at least according to its proponents. 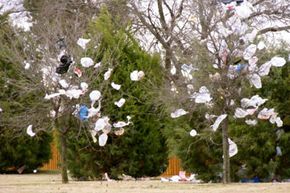 The developed world finds itself confronted with quite a few major problems, but two of the biggest, ostensibly unrelated ones -- an abundance of trash and a shortage of fuel -- may actually end up with a related solution.

A couple of garbage-treatment methods use bacteria to produce an energy source that could potentially power our cars, homes and airplanes. These would be renewable fuel sources and would, overall, contribute no carbon dioxide to the atmosphere. One of the methods would actually be carbon-negative. That one uses agricultural waste to produce a new kind of crude oil.

They call it Oil 2.0, and it is, at least in theory, a viable replacement for fossil fuels. "They" is LS9, a research group that has found a way to genetically alter certain single-celled organisms to produce oil when they consume stuff like wheat straw or wood chips. It works with the bacteria E. coli, as well as with yeast. The end result of the fermentation process is nearly ready to be pumped into a car, according to its developers [source: Ayres].

The whole process runs on agricultural waste products, which remove carbon dioxide from the atmosphere. The conversion, start to finish, produces less CO2 than those waste products remove, so it ends up being not only a landfill reducer, but also an overall atmospheric CO2 reducer.

LS9 plans to have a scalable system up and running by 2011. Some experts aren't sure it'll work out, though, at least on a truly wide scale: It would require a 205-square-mile (531-square-kilometer) fermenter to produce enough oil to fuel the United States for one week [source: Ayres].

There are already ways to turn agricultural leftovers into ethanol, but they're typically pretty expensive and "unclean" in their own right. The Zymetis method is quick, cheap and clean.

Researchers at the University of Maryland discovered that when S. degradans feeds on cellulosic plant waste, like straw, corn cobs and even paper, it creates an enzyme that turns those inputs into bio-fuel-producing sugar. The researchers found a way to produce that enzyme in the lab. Since they can basically create as much as they want, the system is easily scalable; and it doesn't require as much harmful chemical input as current ethanol production methods. If the enzyme makes to into mass production, it'll also be a pretty cheap way to generate clean fuel. And lots of it: Estimates put the generating capacity in the area of 75 billion gallons (283,905 megaliters) a year [source: SD].

While these newer approaches to landfill reduction are still a ways from mass implementation, the trash situation is improving, albeit slowly. Between 2004 and 2005, U.S. production of municipal solid waste dropped by 2 million tons (1.8 million metric tons) [source: CAC]. Composting programs grew slightly during that same period, and the amount of packaging Americans recycled increased to 40 percent [source: CAC]. It's not ideal -- landfills certainly aren't going away any time soon. But it's a start.

For more information on landfills, trash management and related topics, check out the links on the next page. 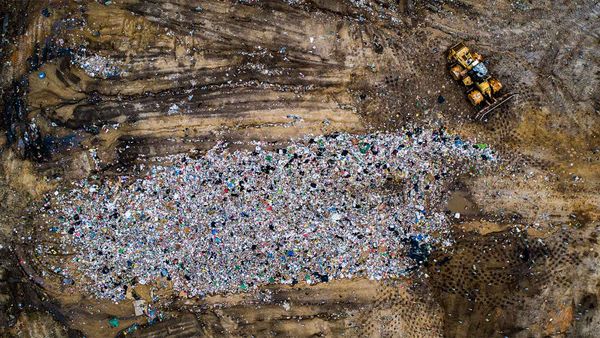 Up Next
How Landfills Work
Explore More 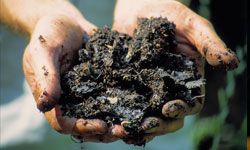