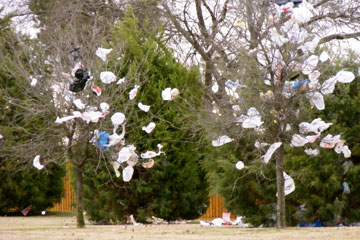 The developed world finds itself confronted with quite a few major problems, but two of the biggest, ostensibly unrelated ones -- an abundance of trash and a shortage of fuel -- may actually end up with a related solution.

A couple of garbage-treatment methods use bacteria to produce an energy source that could potentially power our cars, homes and airplanes. These would be renewable fuel sources and would, overall, contribute no carbon dioxide to the atmosphere. One of the methods would actually be carbon-negative. That one uses agricultural waste to produce a new kind of crude oil.

They call it Oil 2.0, and it is, at least in theory, a viable replacement for fossil fuels. "They" is LS9, a research group that has found a way to genetically alter certain single-celled organisms to produce oil when they consume stuff like wheat straw or wood chips. It works with the bacteria E. coli, as well as with yeast. The end result of the fermentation process is nearly ready to be pumped into a car, according to its developers [source: Ayres].

The whole process runs on agricultural waste products, which remove carbon dioxide from the atmosphere. The conversion, start to finish, produces less CO2 than those waste products remove, so it ends up being not only a landfill reducer, but also an overall atmospheric CO2 reducer.

LS9 plans to have a scalable system up and running by 2011. Some experts aren't sure it'll work out, though, at least on a truly wide scale: It would require a 205-square-mile (531-square-kilometer) fermenter to produce enough oil to fuel the United States for one week [source: Ayres].

There are already ways to turn agricultural leftovers into ethanol, but they're typically pretty expensive and "unclean" in their own right. The Zymetis method is quick, cheap and clean.

Researchers at the University of Maryland discovered that when S. degradans feeds on cellulosic plant waste, like straw, corn cobs and even paper, it creates an enzyme that turns those inputs into bio-fuel-producing sugar. The researchers found a way to produce that enzyme in the lab. Since they can basically create as much as they want, the system is easily scalable; and it doesn't require as much harmful chemical input as current ethanol production methods. If the enzyme makes to into mass production, it'll also be a pretty cheap way to generate clean fuel. And lots of it: Estimates put the generating capacity in the area of 75 billion gallons (283,905 megaliters) a year [source: SD].

While these newer approaches to landfill reduction are still a ways from mass implementation, the trash situation is improving, albeit slowly. Between 2004 and 2005, U.S. production of municipal solid waste dropped by 2 million tons (1.8 million metric tons) [source: CAC]. Composting programs grew slightly during that same period, and the amount of packaging Americans recycled increased to 40 percent [source: CAC]. It's not ideal -- landfills certainly aren't going away any time soon. But it's a start.

For more information on landfills, trash management and related topics, check out the links below.