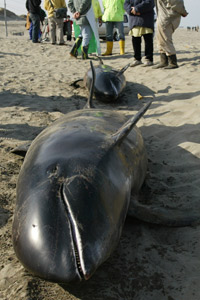 Plastic factors into beachings at least 50 percent of the time. Rescue workers were unable to save this whale near Tokyo.
Koichi Kamoshida/Getty Images

There is a massive floating garbage dump in the Pacific Ocean.

It's not exactly a dump -- it's an accidental accumulation of garbage. Nonetheless, it's the largest dump -- accidental or not -- in the world, roughly the size of two landmasses as big as Texas [source: Berton]. When garbage ends up in the ocean, whether it's carried in tributaries, through sewage systems or by air, ocean currents gather it in specific locations, in particular the 3.5-ton (3.17-metric ton) swirling garbage mass in the Pacific [source: Berton]. As it turns out, 80 percent of this floating ocean landfill is plastic, including the tiny exfoliating particles that get washed out to sea [source: Berton].

We've been hearing about the dangers of plastic for years. Plastic bags suffocate marine life. Plastic six-pack rings choke birds. It has come of something of a surprise, though, to find out that facial cleansers might be getting in on the "kill the animals" action.

It ­turns out that one of the things making microbeads so nice for smooth skin is the same thing that's making ocean life die. Here's the issue: These microbeads, made of a type of plastic called polyethylene, are really, really small. Normally, the particles we wash down the drain get filtered out before they reach the ocean, but this doesn't seem to be the case with these microscrubbers, which are approximately the size of a grain of sand [source: Rosner]. Often, small sea life like mussels and crustaceans mistake them for similarly sized plankton and gobble them up like candy.

The result is a whole lot of dead marine animals. The ramifications go on up the food chain, with larger fish, otters, octopi and whales ending up with large amounts of plastic in their bodies, which we find out when they wash ashore. They can't digest plastic, so it ends up in their tissues and stops them from functioning properly. According to a researcher at Aberdeen University in the United Kingdom who studies beached whales, plastic is a contributing factor in beaching at least 50 percent of the time [source: Hamill].

So, how much of the offending plastic is really from face scrubs? It's hard to be sure. The cosmetic company Olay thinks these particles are in fact filtered out during sewage treatment, but many scientists disagree [source: Rosner]. Some estimates put the percentage of "microplastic," particles smaller than 1 millimeter, at 85 percent of the total plastic count in the Pacific landfill. Current estimates put the plastic-to-plankton ratio in certain areas of the Pacific at 6 to 1 [source: Kostigen].

Smooth-skin seekers needn't give up their exfoliating scrubs, though. While many of the big brands use plastic for their exfoliating scrubs, including Olay, Neutrogena, Aveeno, Clean & Clear and Dove (and others -- check the labels), some companies still use the good-old natural stuff. Biodegradable exfoliants include crushed nut shells, sea salt, sugar, ground bark and sand. Avalon Organics, St. Ives, Burt's Bees and Freeman are just a few of the brands that won't send hoards of plastic down your sink and into the ocean.

For lots more information on plastic, ocean landfills and fish-friendly beauty alternatives, look over the links below.