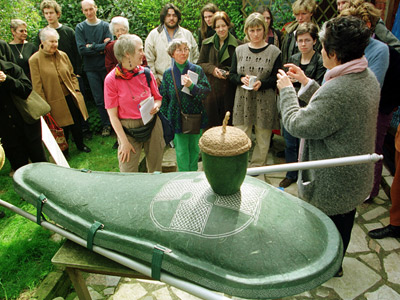 A designer displays her environmentally friendly "Ecopod" coffin along with a papier mâ­ché acorn urn for cremains.
Sion Touhig/Newsmakers/Getty Images

If you spend a lifetime trying to make the world a greener place, why culminate your existence with toxic embalming fluids, a nonbiodegradable casket and final rest under a chemically treated cemetery lawn?

­There are eco-friendly burial alternatives, already popular with Europeans and beginning to capture American interest. Twenty-one percent of Americans over age 50 were interested in green burials, according to a 2007 American Association for Retired Persons (AARP) poll. And nearly half of Americans over 50 wanted more information about environmentally friendly funerals, as an American Cemetery Magazine survey reported [source: Shannon].

So what makes a burial "green?" Green burials don't use formaldehyde in the embalming process, the caskets aren't made of metal or rare wood, and they don't use concrete burial vaults. The aim is to reduce the carbon footprint of your afterlife by reducing toxins, waste and carbon emissions in the interment process. In order to do so, conventional choices are supplanted by green substitutes: biodegradable caskets made from fair-trade bamboo, "Ecopods" constructed from recycled newspaper, cremation urns made from biodegradable materials and shrouds woven from unbleached, natural fibers. Toxic chemicals are removed from the process as well. Dry ice or refrigeration replaces formaldehyde, which is considered a carcinogen by the International Agency for Research on Cancer (IRAC) [source: National Cancer Institute]. Cemetery landscapes are conserved and lawns kept free from pesticides.

Choosing to have your body cremated is popular worldwide and has long been considered more eco-friendly than burial. As it turns out, that's not the case: Crematoriums consume energy to produce temperatures exceeding 1,832 degrees F (1,000 degrees C) and discharge dioxin, hydrochloric acid, hydrofluoric acid, sulfur dioxide and carbon dioxide into the atmosphere [source: Koerth-Baker and Green Burials]. Some countries in Europe are trying to change this, or at least make lemonade from lemons. Crematoriums there are experimenting with harnessing that intense heat and turning it into usable energy. The city of Helsingborg, Sweden, for example, gets 10 percent of its home heating energy from its local crematoriums [source: Koerth-Baker].

There are also some strange options for recycling human remains that are not yet widely practiced.

For those looking to keep their assets liquid even in the afterlife, consider this: Alkaline hydrolysis is the process of dissolving bodies into a sterile, brown syrup the consistency of motor oil that can be poured down the drain. A steel cylinder dissolves the body using lye, 300-degree F (149-degree C) heat and 60 pounds of pressure per square inch (4.2 kilogram-force per square centimeter) [source: Cheng]. It's a technique used currently only to dispose of research cadavers, human medical waste and animal carcasses in veterinary schools, university medical centers, pharmaceutical companies and by the U.S. government (which disposes of infected animal waste through the U.S. Department of Agriculture). It has piqued the interest of the funeral industry, although it isn't yet an offered service. The idea is controversial -- a bill to legalize the alkaline hydrolysis process in New York was nicknamed the "Hannibal Lecter Bill," and one Roman Catholic diocese in New Hampshire considers flushing human remains undignified [source: Cheng].

If you can't see yourself going down the drain, how about being recycled into a synthetic coral reef, graphite or even jewelry? Underwater burial at sea in artificial coral reefs takes your cremated remains, or cremains, and mixes them with concrete to create a home to marine life that's also a memorial. Alternatively, recycling carbon from your cremains into graphite gives you the option to live on eternally as a diamond, or a considerably less flashy lifetime supply of pencils.

With so many choices for your body once you've passed away, who needs to be worm food?