by Michelle Konstantinovsky Aug 30, 2017
A brown bear catches a salmon on its way up river in Alaska. But brown bears on Kodiak Island have turned away from salmon to eat more berries, which are ripening earlier due to warming temperatures. Jennifer Leigh Warner/Barcroft/Barcroft Media/Getty Images

In case you needed even more evidence of global warming's consequences on the environment, kindly turn your attention to Alaska's Kodiak Island. That's where researchers from Oregon State University, University of Montana's Flathead Lake Biological Station and Kodiak National Wildlife Refuge have documented some disturbing changes in the eating habits of local wildlife, and the shifting dietary habits are indicative of an ongoing issue that's sure to have a lasting impact on the ecosystem. The findings of their study were published in the August issue of the journal Proceedings of the National Academy of Sciences.

Their research found that in 2014 and 2015, Kodiak bears — the largest in the world — skipped their typical summer sockeye salmon feasts and instead took to the hills to fill up on red elderberries. While this may sound like an innocent enough move toward vegetarianism, the switch actually spells serious trouble for the animals.

According to the team of biologists behind the study, prematurely warm temperatures are bringing the bears toward the hills and creating an unprecedented interruption in their typical feeding timeline. "An earlier berry crop shut down one of the most iconic predator-prey scenes in nature," Jonny Armstrong, an ecologist at OSU and member of the research team, said in a statement.

Sure, berry hunting certainly makes for less compelling wildlife photography, but the issue is indicative of something much deeper. The year 2014 was one of Kodiak Island's warmest to date, and temperatures are expected to only go up as time goes on. It was during 2014 and 2015 that researchers observed this "prey switch" from salmon to berries. Typically, streams in the summer are filled with bear-shredded salmon carcasses, but during those two summers, salmon swam freely and died after spawning while the bears dined elsewhere. Before 2014, salmon had served as the Kodiak bears' go-to summer fare until the berries ripened in late August and early September.

"As climate change reschedules ecosystems, species that were once separated in time are now getting a chance to interact — in this case the berries, bears and salmon," Armstrong said in a statement. "This is going to have large impacts that are hard to predict."

One potential domino effect of this switch could affect the local bird population, which relies on the bears to pull salmon out of the streams. Later down the line, the demographics of the bears themselves could change as their diets shift, the salmon population evolves and plant pollinators are affected.

"It is a strange, indirect effect of climate change," said the study's lead author, Will Deacy, a postdoctoral researcher in OSU's College of Agricultural Sciences. "These bears eat dozens of different foods throughout the year but now two of them are overlapping. This is causing a disruption in the food web that could have profound implications for the ecology of the island."

Now That's Cool
Kodiak bears are a subspecies of brown or grizzly bears, but they've lived in isolation on the islands in the Kodiak Archipelago and apart from other bears for about 12,000 years. 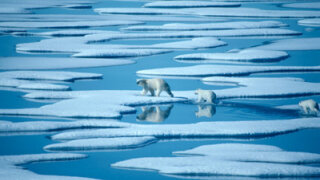 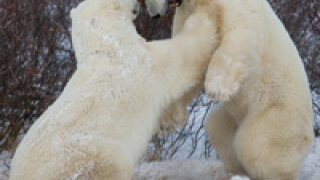