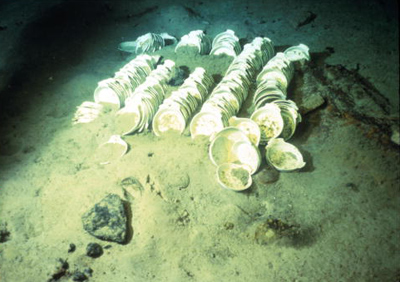 A 1987 image of dishes from the Titanic on the ocean floor. The great ship is situated on an abyssal plain in the North Atlantic Ocean.
John Chiasson/Liaison

The abyssal plain is a vast expanse of ocean that stretches from bottom of the continental slopes to the trench zones, where deep canyons like the Marianas Trench cut through the ocean floor. The abyssal plain begins at a depth of 4,000 meters (around 2.5 miles below sea level). There is little or no light to allow photosynthesis to take place, which means there's no native plant life. The food supply is made up of dead and decaying plant and animal matter that's sunk to the ocean floor. The animal population along the abyssal plain is sparse, and the area is large and generally flat.

At this depth, the temperature hovers around 2 degrees Celsius (35.6 degrees Fahrenheit) and the atmospheric pressure exerted by the force of gravity is 5,880 pounds per square inch (413.3 kg/sq. cm) [source: University of Hawaii]. That's a much different environment than what we're used to at sea level, where the atmospheric pressure is 14.7 pounds per square inch (1.03 kg/sq. cm) [source: Texas A&M University], and the average global temperature was 14.77 degrees Celsius (58.6 degrees Fahrenheit) in 2005 [source: Earth Policy Institute]. Featuring these conditions, the abyssal plain is an ideal location to store liquefied carbon dioxide.

Dr. David Keith proposed that the abyssal plain be the site for huge bags made of polymers, about 600 feet (183 meters) in diameter to serve as storage containers for liquid carbon dioxide. The CO2 would be delivered to the ocean via pipeline, like crude oil is delivered to refineries. Each bag could hold about two days' worth of the world's carbon dioxide emissions -- 160 million metric tons [source: Natural Sciences and Engineering Research Council]. One of the things that makes Keith's proposal so attractive is that the technology to make it happen already exists. We currently have CO2 pipeline delivery system technology, and both pre- and post-combustion capture systems are already extant.

Keith spoke about his idea in a lecture to the American Association for the Advancement of Science in February 2008. If his concept is put into practice, the giant containment bags should prevent damage to the oceanic ecosystem by preventing the release of large amounts of CO2 into the ocean. Keith says the carbon dioxide's negative buoyancy would keep the gas from surfacing  [source: Natural Sciences and Engineering Research Council].

With the amount of storage space needed to contain the world's CO2 emissions, the abyssal plain may be only one locale where we keep our carbon dioxide. Depositories deep in the Earth's crust are another location being evaluated, which makes sense, since this is where most of the fossil fuel we refine came from in the first place.

Simply storing the CO2 might sound like sweeping a problem under a rug, but it's difficult to say what technology humanity will have at its disposal one or two centuries from now. It's possible we will have discovered some use for the compound we don't currently have. It could prove to be an energy source in the future. If peak oil theorists are correct, we will have largely discontinued our use of fossil fuels and the carbon cycle may be able to handle slow releases of CO2 from storage.

Interestingly, we may have also developed a way to recreate the situation that produced our fossil fuels in the first place. Using gravity and carbon, we could theoretically synthesize fossil fuels. By capturing the CO2 emitted and reusing it as an ingredient in this synthesis, we could create a closed system that could meet global energy needs without adversely affecting the carbon cycle. To successfully pull off such a system, we would need plenty of CO2 in the future. If Keith's bag system works, it will be there waiting.