Browse the article China Says We Don't Want Your Plastic 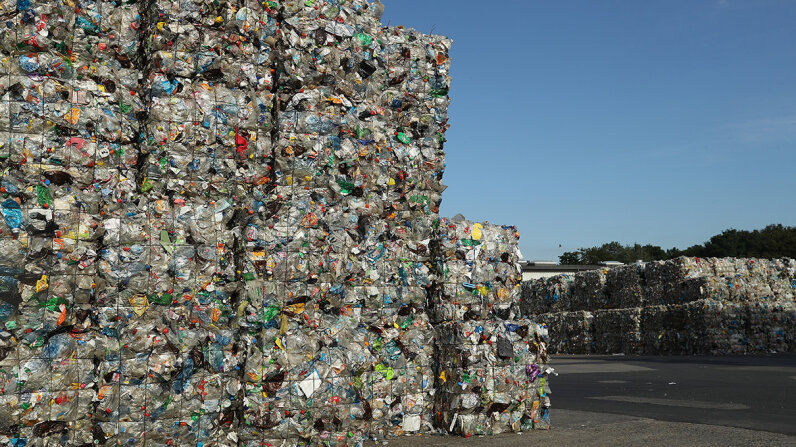 For years, China has been the top importer of recyclable material, taking in about half of the world's plastics and paper and turning the rubbish into useful materials. So, it was quite a shock when in 2017 the Chinese government announced it was changing its rules on the importation of waste.

Instead of accepting bales of recycled materials with 5 percent impurities as had been the norm, China said it would only accept bales containing less than 1 percent, a nearly-impossible standard to meet in the short-term. When the Chinese announced the change, no one was exactly sure how it would play out. Now they know.

As the new rule took effect in January 2018, many countries, including the United States, Canada, Ireland, Great Britain and Germany began to scramble to find ways to dispose of their recyclables that just months ago would have gone to China. As a consequence, tons of inventory began piling up on docks, in municipal landfills and in processing facilities. In Halifax, Nova Scotia, for example, the city needed special permission to bury 330 tons (300 metric tons) of plastic in the local landfill.

"They didn't give the world a whole lot of time to get ready for this," Adina Renee Adler, senior director of international relations and international affairs for the Institute of Scrap Recycling Industries, says.

The rules change encompasses 24 categories of solid waste, including certain plastics, paper and textiles. The problem, Chinese officials claim (though others dispute this), is that large amounts of contaminated material were being mixed in with the recyclables the country was accepting. The Chinese also bemoaned the fact that much of what they were taking in was not properly scrubbed and sorted.

"Large amounts of dirty wastes or even hazardous wastes are mixed in the solid waste that can be used as raw materials," Chinese officials wrote to the World Trade Organization when announcing the move. "This polluted China's environment seriously."

Since the 1980s, China has been the world's largest importer of solid waste, using these recyclables to power its manufacturing industry and to fuel its burgeoning economy. As Chinese industry grew more robust, the country also became one of the world's most polluted, forcing the government to take steps to protect the environment.

"They do have a tremendous environmental problem on their hands," Adler says. "One of the government's directives has been to better manage waste domestically ... and do it quickly. They gave us practically no time for any kind of transition."

Regardless, China's crackdown has provoked a soul-searching moment as the rest of the planet tries to find both near-term and long-term solutions. For years, the world's nations relied on China to take in its unwanted refuse. In 2015, for example, China bought 49.6 million tons (44.9 metric tons) of trash, while the European Union in 2016 sent 85 percent of its sorted plastics to the Asian giant; Ireland 95 percent of its plastic waste, and the United States 16 million tons (14 million metric tons) of recycled scrap. In 2016, China processed 7.3 million tons (6.6 million metric tons) of paper, metals and used plastic.

Now that China has essentially closed its doors, there are those who say its actions should be a wake-up call because there is simply no more room at the local landfill or incinerator plant. Consider these numbers:

Consider the example San Francisco has set for the rest of the planet. The city is one of the most recyclable-friendly communities in the world. Its so-called Zero Waste initiative, one of the most muscular in the nation, is designed not to send any trash to the landfill or incinerator, but rather increase the rate of recycling and composting. In 2002, the city set a goal to be Zero Waste by 2020.

To that end, Recology San Francisco, the employee-owned firm that runs San Francisco's recycling program with the city, has developed many programs to produce better quality recyclables while drastically reducing the amount of trash people toss.

Together Recology and San Francisco instituted one of the first programs that picks up compostable material at the curb. People simply put compost into green bins so it doesn't commingle and contaminate other recyclables.

"The goal [of the Zero Waste initiative] encourages San Franciscans to reduce waste, reuse materials, and be more attentive to recycling and composting," Robert Reed, spokesman for Recology says in an email. "Last November we reached the milestone of composting 2 million tons (1.2 million metric tons). We diverted all that material from landfill disposal and instead turned it into nutrient-rich compost that is applied to local farms and vineyards.

"Recycling is good for the economy too," Reed continues. "We created more than 200 new jobs (permanent, local jobs) in San Francisco in 10 years while expanding the city's recycling program."

Each day the world's population generates nearly 3.5 million tons (3.1 million metric tons) of garbage a day, 10 times the amount in 1918. That number is expected to grow to 11 million tons (9.9 million metric tons) by the end of the 21st century. But there is a glimmer of hope. The Zero Waste movement is strong in many communities. The only way out of the trash bin we've created, it seems, is to recycle and recycle smartly.