Browse the article How do you clean up an oil spill? 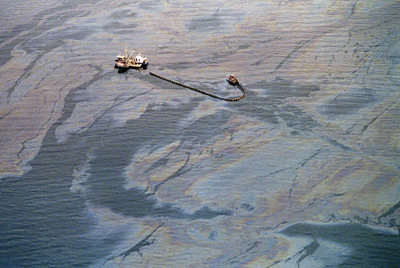 In 2006, the world consumed more than 3.5 billion gallons of oil each day [source: U.S. Dept. of Energy]. Sixty percent of that oil reached its destination by sea [source: Corn]. Fortunately, due to stricter penalties and better ship design, the number of oil spills has decreased since the oil shipping boom began in the 1960s. Unfortunately, they haven't been eliminated. Between 1990 and 1999, an average of 150,000 tons of oil spilled each year into the world's waterways [source: National Academies]. 2001 was a particularly bad year, with five spills occurring within the same week [source: Marine Group].

In March 1989, the Exxon Valdez catastrophe opened the eyes of the American public to the problem of oil spills. The Valdez ran aground in Prince William Sound in Alaska releasing 11 million gallons of crude oil. As a result, Americans saw countless dead and dying birds and aquatic mammals covered in oil. People began to wonder just how the experts clean up oil spills.

Supertankers aren't the only sources of oil spills. Underwater pipelines, offshore oil drilling rigs, and coastal storage facilities and refineries all have the potential to accidentally release crude oil into the water.

­But how exactly do you undertake the daunting task of cleaning up millions of gallons of oil? Agencies responsible for cleaning up oil spills -- like the Coast Guard and the Environmental Protection Agency -- have some clever and relatively simple methods.

It's fortun­ate that oil and water mix like, well, oil and water. When an oil spill occurs, the oil forms a millimeter-thick slick that floats on the water. The oil eventually spreads out, thinning as it does, until it becomes a widespread sheen on the water. How fast a cleanup crew can reach a spill -- along with other factors, like waves, currents and weather -- determines what method a team uses to clean a spill.

A slick like this may also call for sorbents -- large sponges that absorb the oil from the water. Cleanup crews may set the oil on fire in a process called in situ burning, but this produces toxic smoke, and probably wouldn't be used in a spill near coastal settlements.

An oil spill reached relatively quickly and located away from towns is the easiest to clean up by one of these methods. But rarely do things work out so easily. Oil spills are generally very messy, hazardous and environmentally threatening. Spills may reach shorelines, have time to spread and affect wildlife. In these cases cleanup crews use other measures. Read the next page to learn about other methods of cleaning oil spills. 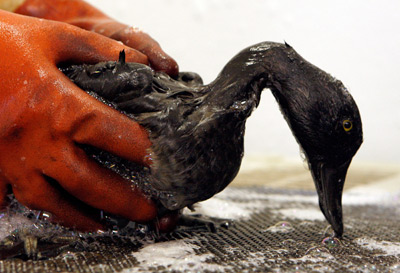 Saving wildlife, like this bird which was polluted from a 2007 spill in San Francisco Bay, is another factor in cleaning oil spills.
Courtesy Justin Sullivan/Getty Images

The sun, wave action and weather all contribute to the breakdown of oil in water. Eventually, the oil will evaporate. Because of this, experts leave some oil spills alone. If the slick doesn't threaten wildlife, business or civilization, cleanup agencies may choose to let the natural processes handle it. Oil always floats in salt water, and most of the time in fresh water. In fresh water, though, the heaviest crude oil may sink. Often, as it breaks down, oil will mix with water -- along with particulate matter like sand -- and become tar balls. These balls tend to harden on the outside and stay soft in the middle. Since they are separate and scattered, tar balls and other degraded forms of oil in the sea don't pose the same kind of environmental threat as concentrated oil slicks do.

Often, oil spills in tropical areas are handled with dispersants -- chemicals which break down oil much more quickly than the elements can alone. Dispersants break the oil slick apart, allowing oil droplets to mix with water and be absorbed into the aquatic system more quickly. These chemicals pose their own danger, however. This broken-down oil can be absorbed by marine life and into the food chain. A 2007 Israeli study also reported that the combination of dispersants and broken-down oil are actually more toxic to tropical coral reefs than raw crude oil [source: Science Daily].

When a slick threatens to infiltrate coastal areas -- or worse, an oil spill occurs near a coastal area, as when a tanker runs aground or a refinery leaks -- the situation becomes even more dire. Cleaning the spill becomes trickier as well, and methods to deal with the oil must also be more delicate.

One method for dealing with oil spills that have reached shore is to employ biological agents. Fertilizers like phosphorus and nitrogen are spread over the oil-slicked shoreline to foster the growth of microorganisms, which break down the oil into natural components like fatty acids and carbon dioxide. Other forms of biological agents can also be used in marine -- or open sea -- spills.

But spills on the shore are most likely to affect wildlife habitats.

The severity of the spill and its proximity to wildlife habitats have an effect on the numbers of aquatic wildlife hurt or killed. Waterfowl and other animals like seals and otters can become covered in oil, which breaks down the water-resistant properties of the birds' feathers, as well as the insulation provided by sea mammals' fur. Animals can be poisoned by the oil they ingest while licking themselves clean [source: NOAA].

Oil cleanup agencies use floating dummies and balloons to scare wildlife away from spill areas, but it doesn't prevent animals from being affected. Experts have techniques to help minimize the mortality rate among animals that become polluted by oil, but rescuing birds and sea mammals like walruses and otters present challenges. One thing is encouraging: Since the Exxon Valdez ran aground, the experts are having to clean up spills less often. The U.S. Coast Guard reports that by 2004 there was a 58 percent decrease in oil spills in American waters from 1989.

No matter how successful and extensive the recovery effort, oil spills leave an indelible mark on the environment they impact. In 2007, 18 years after the Exxon Valdez spill, areas along Prince William Sound are still polluted from oil that has yet to completely biodegrade [source: Science Daily].

For more information on oil, the environment and related topics, visit the next page.