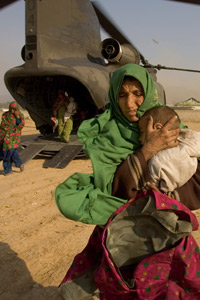 ­Why climate refugees flee their homes is a complicated mixture of environmental degrad­ation and desperate socioeconomic conditions. People leave their homes when their livelihoods and safety are jeopardized. What effects of climate change put them in jeopardy? Climate change triggers, among other problems, desertification and drought, deforestation, land degradation, rising sea levels, floods, more frequent and more extreme storms, earthquakes, volcanoes and famine.

Through observation and modeling, experts predict the hardest hit populations will likely be in Africa, Asia, Latin America and the Small Island States, an alliance of low-lying coastal countries around the world. The poorest populations are at risk because they often live in disaster-prone places such as steep hillsides, coasts or low-lying floodplains. It's estimated that nearly 100 million people live in regions that are below sea level [source: Inter Press Service]. A 1-meter (3.3-foot) rise in sea level, which is estimated by 2050, would plunge 3 million hectares (30 billion square meters) of Bangladesh underwater and displace 15 to 20 million people [source: Center for American Progress]. But there's no need to wait 40 or 50 years to see the effects of changing sea levels -- rising waters have already forced the residents of some Small Island States to relocate, and it's likely that the Carteret Islands, for example, will be submerged by 2015.

Climate change does not impact all people and all parts of the world in the same way. While floods ravage some areas, deserts are spreading in others. Desertification and depleted resources, including shortages of water and fertile land, are long-term consequences of global warming. They generate poverty and often incite conflicts, political crises and, in turn, population displacement. In its most recent report, the Intergovernmental Panel on Climate Change (IPCC) states that by 2080, 1.1 to 3.2 billion people will experience water scarcity, 200 to 600 million hunger and 2 to 7 million a year coastal flooding [source: The Guardian].

Development and energy projects such as dams and roads also contribute indirectly to the problem; in the coming years, 250 million people could be displaced permanently by drought, flooding and intense storms, while 645 million will be forced out of their homes due to development projects [source: The Guardian].

When faced with the decision to flee, most climate refugees stay within their own country or region -- called short-distance migration and internal displacement. Leaving your country requires money for travel and could mean leaving family behind, whereas short-distance migration is usually relocation from a rural to urban area in search of work and resources.

­The chance for return and resettlement back home is unlikely, though. In instances when an area is temporarily inhabitable, like a hurricane, returning home may be an option. But when coastlines -- or entire islands -- are underwater, the possibility of going home is nonexistent. Adaptation and resilience will be the key to reducing displacement risk, both temporary and permanent, in the forms of early warning systems and flood-defense infrastructure, sustainable agriculture and drought-resistant crops, as well as other protections.

One well-known example of human migration in the United States happened during the Dust Bowl of the 1930s. Poor agricultural practices, combined with environmental and economic crises, left millions of acres of land barren and millions of people destitute. About one-third of the farmers in the Great Plains, nicknamed the Okies, packed up their families and headed to California, seeking migrant labor jobs and relief from the drought, winds and clouds of dust.