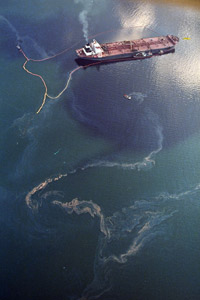 ­During an oil spill, liquid petroleum is released into the environment and the black sticky substance covers everything it touches: soil, water and wildlife. Between 1970 and 2007, nearly 6,062,712 tons (5.5 million metric tons) of oil were spilled in incidents around the world [source: The International Tanker Owners Pollution Federation]. The costs associated with each cleanup are influenced by a combination of three factors: the location of the incident, the type of oil spilled and the amount of oil spilled. Cleanup response and strategy is also based on these factors. Standard response to oil spills includes cleanup equipment and techniques consisting of mechanical containment (such as booms, barriers and skimmers), chemic­al and biological methods (including dispersants to break up the oil), physical methods (such as pressure washing) and scare tactics to keep wildlife at a safe distance.

Using techniques such as dispersants or mechanical recovery to remove an offshore spill costs an average of $7,350 per metric ton of oil. Cleanup costs of shoreline spills jump to an average of $147,000 to $294,000 per metric ton because of the additional coastline damages [source: Etkin]. Because equipment needs to be brought to the scene of the incident, commonly flown in, remote spills can sometimes present logistical problems.

­Currently, mechanical containment is the most popular method of recovery in the United States, but it's only able to clean about 10 to 15 percent of a spill [source: European Commission, Environmental DG]. Microbiologists are heralding an environmentally friendlier technique: bioremediation through biological remedial agents. Bioremediation treats pollutants (such as an oil spill or contaminated groundwater) with bacteria bioengineered to break down contaminants. Add to that bioluminescence and color-coding, and you get bacteria that not only eats oil but also helps alert us to the presence of oil spills and other environmental pollutants seeping from pipes or storage tanks into water or soil. 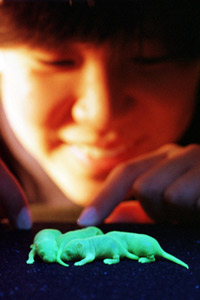