Browse the article Is conservation agriculture better than organic farming? 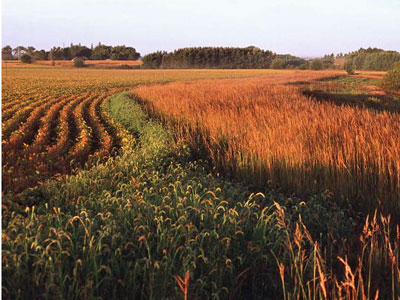 Organic farming has positioned itself as the current state of the art in "green" agriculture. The industry has exploded, growing by 20 percent every year since the late '90s [source: OFRF]. "Organic" isn't only a top choice for the very health-conscious, but also for the ecologically conscious: In organics, synthetic chemicals that can damage the land and leech into rivers are a no-no, and particular crops are planted where they'll thrive naturally, instead of adjusting the land to suit the desired product.

In terms of health, it's a logical jump to say that a naturally grown carrot could be better for us than ­one grown using, say, pesticides. But is organic farming as healthy for the Earth as it is for our bodies?

Another approach to farming has emerged that raises this very question. It's not a household word like "organic," but it has been around as a cohesive agricultural practice for decades. Farmers practice conservation agriculture (CA) around the world, but it's only now starting to get a lot of press as an eco-friendly approach to agriculture. CA is challenging organic farming for the greenest of the green labels.

Both methods try to maintain a balance between agriculture and resources. Conservation farming and organic farming rotate crops in order to keep the land fertile, plant cover crops to retain water, and replenish soil's organic matter to cultivate pest-resistance and high nutrient value. Boiled down to its most basic, there is one primary difference between organic and conservation agriculture: Organic farmers till (plow) the soil to prepare for planting, while conservation farmers avoid tilling unless there's no other choice. They leave the soil cover intact and get the seeds in the ground another way.

­In this article, we'll look at organic and conservation agricultures from the perspective of environmental friendliness. Should organic really be at the top of the green food chain? What's the issue with tilling, anyway? Let's take a look at what tilling is, what it's used for and what long-term effects it has on the land. The plough is such an ancient part of farming -- how can it be bad? 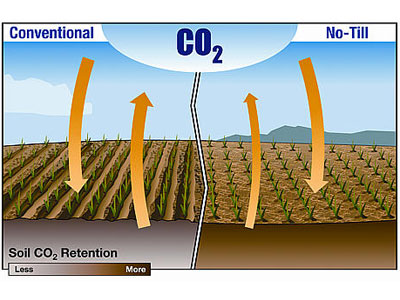 The debate between conservation agriculture and organic farming has to do more with their practices than their overall ideology. Both strive to achieve balance between people and the land so that the land can continue to meet peoples' needs, perhaps indefinitely. But they go about achieving this goal in different ways. The big issue here is soil erosion.

Ecology professor David Pimentel of Cornell University (you may remember him from Is ethanol really more eco-friendly than gas?) notes that almost 25 million acres (10.1 hectares) of soil are eroding every year, often as a result of conventional farming techniques. This is up to 40 times faster than it can be restored [source: Economist]. That means a corresponding loss in income for farmers and in output for consumers.

To address the erosion problem, organic farmers use the technique of planting crop cover. They plant specific vegetation (in addition to the food crop) to, among other things, improve soil's water retention. This can keep soil from being washed or blown away.

But, to address the problem of weeds without using herbicides, organic farming requires that farmers till the land. They churn up the crop land, pulling up weeds and mixing them into the soil. Many experts attribute the severe erosion problem to this churning up the upper layers of soil before planting. Disturbing the soil cover, loosening it so it's no longer tightly packed, leaves it more susceptible to being displaced by the elements.

This is where conservation farming steps in. CA is a no-till or low-till process. Instead of churning up the soil, CA farmers leave a permanent soil cover and drill through the upper layers to plant the seeds. They use herbicides and active manipulation of organic matter in the soil (as in organics) to deal with the weed problem. Leaving the soil intact also increases its ability to hold onto carbon dioxide, which means less CO2 is released into the atmosphere.

Since no-till agriculture helps manage the erosion issue that can leave entire tracts of land unfit for food production, conservation farming practices are picking up everywhere. Globally, an estimated 100 million crop acres are grown using CA principles, but it's most popular in the Americas [source: FAO]. In Brazil, at least 50 percent of crops are grown using the conservation method [source: Economist]. At one time, CA techniques were mostly used for grain crops, but the expansion of those techniques to encompass vegetables, fruits and other foods makes it a widely viable option, especially in areas where organic farming is impossible due to a shortage of natural (manure) fertilizer.

Which is better, organic or conservation? That all depends on where you're coming from. If ingesting chemicals from your food is your primary concern, you might prefer organic-farming methods. If you're more interested in long-term soil conservation, perhaps you should be on the lookout for a green "Conservation Grown" label. You may soon find it right alongside the "Organic" label.

Whether CA wins the grocery-store green label or not, the eco-friendly farming battle is on. The most likely outcome is a wash [source: Saikat] -- in the end, organic may be most suitable for one location, and conservation for another. It all comes down to choosing the right set of practices for a given geographic area and the practical limitations faced by farmers working that land.

For more information about conservation agriculture, organic farming and related topics, take a look at the links on the next page.