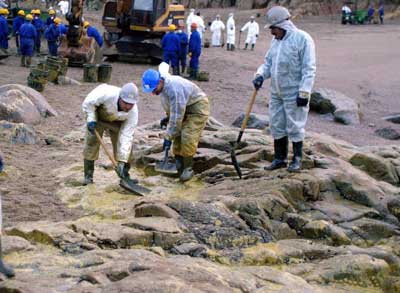 Workers try to clean up an oil spill at the Bens beach, near Coruna, in northwestern Spain.
AFP/Getty Images

Earth 911 Business serves up the same type of information posted at the main Earth 911 site, except tailored for businesses. It provides information on the following:

Beaches 911 is dedicated to monitoring water quality at U.S. beaches. In 2006, water pollution resulted in more than 25,000 beach and lake closings [source: NRDC]. Users access the site, click on a state's name and view the beach water status of their favorite locations. For participating regions, each beach on the map is marked with a color-coded pin. Green means the water quality is acceptable, yellow means the beach is under advisory and red means the beach is closed. As with the rest of the Earth 911 content, the content on Beaches 911 is community-supplied. In addition to the water quality status reports, Beaches 911 features articles on beach safety, keeping beaches clean and water conservation. Users can also sign up for e-mail alerts about the water quality status of their favorite beaches.

Clean Boating offers environmental guidelines for boaters. This site is limited to the state of California but does offer some general guidelines for clean boating. Information offered includes:

Now that you've learned how Earth 911 works, perhaps you'd like to learn more on the topic of being green. Read the links on the next page for more information on keeping our environment healthy.

Earth 911's work is referred to as cause media, and it is not the only cause media portal out there. The late Earth 911 founder, Chris Warner, also helped create the Amber Alert web portal. The Amber Alert system was named after eight-year-old Amber Hagerman, who was kidnapped on Jan. 13, 1996 and murdered. Here's how the portal works: When law enforcement personnel identify a child abduction situation, they can authorize an Amber Alert and enter the information into the web portal. Immediately, the alert circulates to all cell phones, email addresses and fax numbers registered with the site. Television news report may then re-distribute this information [source: AmberAlert.com].