Browse the article How Eco-anxiety Works 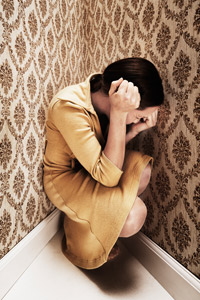 If an environmental documentary or forgotten grocery tote makes you feel helpless and overcome with grief, you might suffer from eco-anxiety.
Henrik Sorensen/Stone/Getty Images

­Do ­you burst into tears at the mere mention of the shrinking Amazon rainforests? Does the question, "Paper or plastic?" send you into a mental tailspin? Have you spent sleepless nights worrying about whether the bleach you poured into your washing machine is going to eventually make its way into your drinking water?

If you answered "yes" to any of these questions, you may be among the growing number of people in the United States suffering from eco-anxiety. This relatively new psychological affliction is a chronic fear of environmental doom -- the concern that increasing human development and pollution are leading us into an inevitable scourge of floods, famines, heat waves, species extinctions, and ultimately, the demise of our planet.

Eco-anxiety is real, according to some psychologists, and it can really stress you out. As one eco-anxious reporter described it, "The sight of an idling car, heat-trapping carbon dioxide spewing from the tailpipe, would send me into an hours-long panic, complete with shaking, the sweats, and staring off into space while others conversed around me" [source: Plenty].

Unlike the general sort of anxiety disorders that grip an estimated 40 million people in the United States, eco-anxiety is a more specific sort of worry [source: NIMH]. The eco-anxious are single-minded in their fear: They focus on environmental destruction.

­While not everyone has this level of anxiety about the plight of the environment, surveys show many people are deeply concerned. According to a Gallup poll, 36 percent of Americans say they worry "a great deal" about global warming, and 35 percent say they believe it will "pose a serious threat" to them or their way of life in their lifetime [source: Gallup]. Studies also show that women are more worried about the environment than men [source: International Herald Tribune].

Read on to find out why people are working themselves into a tizzy over melting glaciers and the plight of the polar bear. 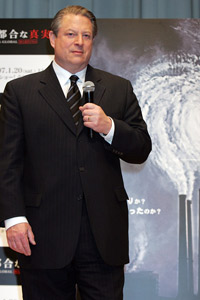 Some people found the proactive message of "An Inconvenient Truth" to be debilitating.
Junko Kimura/Getty Images

Many say the media are driving eco-anxiety. And it's no wonder people are so anxious, with doomsday hea­dlines bombarding them on the Internet and through periodicals, while television news programs broadcast the latest global food shortages and diseases linked to toxic chemical exposure.

We can't even escape at the movies. In his 2006 Oscar-winning documentary, "An Inconvenient Truth," Vice President Al Gore warned us that we might be a mere decade away from a global environmental disaster. It was really time to be afraid -- very afraid.

In addition to working up the public, the media sometimes blow real environmental threats out of proportion, leaving many unsure as to the actual probability of a cataclysmic environmental disaster, according to some experts [source: CNBC]. We're also made to feel disproportionately guilty about our own role in the impending crisis, particularly if we've chosen to drive a big SUV or we often forget our reusable totes at the supermarket checkout line.

­The media are a big part of eco-anxiety, but psychologists say other elements are fueling our worry [source: Plenty]. A bi­g part of it is our growing sense of disconnectedness from family, friends and neighbors. When you're talking to no one but your computer, it's easy for your worries to spiral out of control. With so many environmental concerns occurring simultaneously around the world, it's also easy to get lost in the big picture and feel utterly helpless.

What Can Eco-Anxiety Do to You?

Therapists who treat eco-anxiety say their patients report a number of general anxiety symptoms, including loss of appetite, irritability, panic attacks, insomnia, nightmares, unexplained weakness and actual physical pain. Some people say they cry uncontrollably at the thought of the polar ice caps melting or of yet another species facing extinction.

Some people feel grief, while others experience helplessness or depression. Among the strangest of the reported symptoms is a "buzzing" feeling, as though people's cells are alive and twitching [source: Columbia News Service].

­In its most extreme form, eco-anxiety might even spawn rage, psychologists say. Groups of so-called eco-terrorists have used destruction to bring about their aim of environmental change. They have, among other acts, set fire to a $50 million San Diego housing complex and taken baseball bats to Hummers to vent their eco-rage [source: MSNBC].

Most people with eco-anxiety don't take their concerns to such an extreme, but they may become consumed with making eco-friendly changes in their lives. For example, eco-moms worry over waste-free school lunches, low-energy lightbulbs, and environmentally safe dishwasher and laundry detergents. They compost their organic trash in the backyard, and send their kids to school with a reusable lunchbox filled with hormone-free milk, antibiotic-free chicken strips and locally grown, pesticide-free apples.

If you're not sure whether you're environmentally aware, active or anxious, take the Green Guide's handy online quiz. With questions like, "The local farmer's market is closed for a holiday, and you can't buy your local, organic apples. You …" you can figure out whether you're moderately eco-anxious or obsessed with the planet's imminent peril.

How Is Eco-Anxiety Treated? 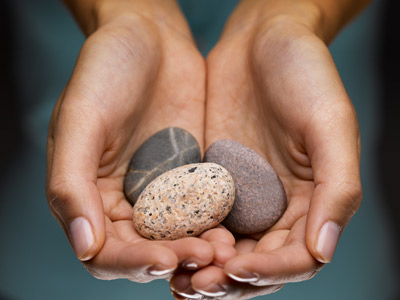 Some eco-therapists help patients by urging them to carry around reminders of nature like pebbles or bark.
Jeffrey Coolidge/Iconica/­Getty Images

In recent years, an entire branch of psychology, named ecopsychology, has sprouted up. It's devoted entirely to the study of environmentally spawned angst. The term ecopsychology was popularized in the early 1990s by social critic Theodor Roszak and others. The idea behind it is that people's relationship with the Earth is crucial to their physical and emotional well-being. Any disruption in this relationship can lead to stress and anxiety. Ecopsychology investigates how an individual's upbringing and background contribute to his or her relationship with the environment. It also looks at the person's carbon footprint and how he or she is working to help the environment and offers suggestions on how to reduce eco-anxiety.

­Ecopsychologist Michael J. Cohen developed an idea called the natural systems thinking process (NTSP), which furthers the idea that our anxiety is rooted in a disconnect between our health and the health of the planet. Cohen says we ­need to reconnect with nature to heal our emotional discord [source: Cohen].

So what do you do if you are suffering from eco-anxiety? Some people see an eco-therapist. According to the International Community for Ecopsychology, there are almost 150 ecopsychology practitioners around the world [source: Ecopsychology]. More colleges and universities, like Naropa University in Boulder, Colo., and Prescott College in Tucson, Ariz., have started offering ecopsychology as a major, so the number of trained eco-therapists is likely to grow.

Eco-therapists charge up to $250 an hour to diagnose the cause of your worries and offer solutions [source: MSNBC]. Some eco-therapists advise their patients to get outside and feel closer to nature, while others recommend that patients bring nature closer to them by carrying around a rock or piece of tree bark.

­Sometimes the best way to feel less helpless about the environment is to do something about it. Eco-therapists will often recommend that their patients start an environmental group at their work, school or place of worship. Other ways to get involved are by installing low-energy lightbulbs throughout your home or by carrying reusable shopping bags with you to the grocery store. You can also make a donation to a fund that protects the environment, like the Sierra Club or the Audubon Society. Sometimes all it takes to relieve eco-anxiety is to escape from the purveyors of doom and gloom. Turn off the TV, shut down the Internet and accept that while you can't control everything, you can live responsibly.