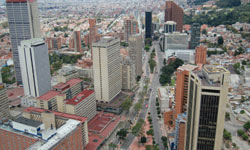 Though it's a bustling city, every February 1st, Bogotá goes without the use of cars.
©iStockphoto.com/Jerry Koch

Enrique Peñalosa, the former Mayor of Bogotá, is still justly lauded for the many initiatives and creative problem-solving ideas he made popular during his time in office. A Duke University graduate in economics and a lover of capitalism, Peñalosa nonetheless created change based on a philosophy of "hedonics" -- he brought about change through planning around human happiness, rather than economic growth.

For one example, Peñalosa was offered a huge endowment for roads, and instead he used this money to set up a bus system. He revitalized green spaces by overhauling the bike paths in the city, saying, "A bikeway is a symbol that shows that a citizen on a $30 bicycle is equally important as a citizen on a $30,000 car" [source: Montgomery]. He also promoted designing for children as a first priority, intuiting that a city successful for children would be successful for everyone.

Each February 1st, El Dia Sin Carro (Car-Free Day) wipes all engine sounds and exhaust from the city altogether. In fact, a lot of Peñalosa's anti-auto ideas came from his belief that commutes, not work itself, are what depress the work force in a city like his. "A city can be friendly to people or it can be friendly to cars, but it can't be both," he announced, raising gas taxes and, eventually, raising school enrollment by a staggering 30 percent, speeding up rush hour traffic by a factor of three, and dropping the murder rate by 40 percent [source: Montgomery].

Perhaps there's something to the science of happiness, after all.