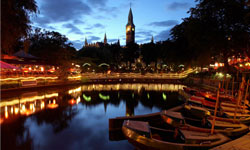 Some cities are finding innovative ways to include green space in their urban landscape. In 2000, the city of Chicago planted a garden in place of the black tar roofing on a city government building. Green roofing offers similar benefits to gardens and parks at ground level by helping to reduce urban heat islands. Green rooftops also add a layer of insulation to the building, keeping it warmer in the winter and cooler in the summer, reducing the building's energy costs.

The 1.7 million people living in Copenhagen are known for eschewing cars for bikes or the metro system, but green transportation is only part of the city's eco-friendly urban plan. In 2006, Copenhagen won the European Environmental Award for its clean waterways and leadership in environmental planning. What led to its prestige? Water and windmills.

The city is lauded for its efforts over the last 10 years to keep its harbor waters safe and clean. Officials invested in a water quality warning system to monitor pollution levels.

Additionally, Copenhagen is famous for its windmills. More than 5,600 windmills supply 10 percent of Denmark's electricity; and in 2001, Copenhagen opened the world's largest offshore windmill park. The new park is able to power about 32,000 homes in the city, supplying about 3 percent of the city's energy needs [source: Grist].

What is "Green" Space?

"Going green" can mean literally just that -- turning your community green with foliage. And green space is exactly what it sounds like: It's the amount of open space reserved for plants and trees, gardens, parks and nature preserves. Green space improves air quality, cuts pollution levels and energy costs, and adds to the aesthetic of the city.