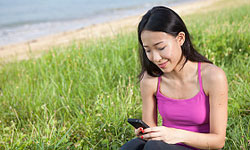 What if all those text messages could help save our planet?
Eternity in an Instant/Digital Vision/Getty Images

Everywhere you look, people have their heads down, vigorously texting away as though their lives depended on it. Americans sent a whopping 12.5 billion text messages in just one month in 2006, and cell phone users in the United Kingdom send out one billion a week [source: CTIA, text.it]. Admit it -- sometimes that obsession with text messaging can be annoying, but what if each of those finger taps could generate power?

That's just the idea behind Push to Charge, one of the innovative entries into the 2008 Greener Gadgets Design Competition. The concept relies on piezoelectricity, which is a fancy way of describing the way some metals generate electricity when hit. (Electric cigarette lighters use piezoelectric crystals.)

The Push-to-Charge cell phone would feature plastic buttons sitting atop a layer of hard metal. The bottommost layer would be made out of piezoelectric crystals, so that each time you pressed a button, the hard metal directly underneath it would hit the underlying crystal like a hammer, creating a small amount of voltage. Small wires located between the layers would convey the charge to a battery for storage.

The electricity generated by hitting just one button would be miniscule -- an estimated 0.5 watts, according to the inventor. But when you add up all the buttons required to send a single text message and multiply that by the number of text messages sent each day, that's quite a lot of wattage [source: Parker].

The same technology could be used in any other product that features buttons, including computer keyboards and video games. If all the HowStuffWorks writers had their computers hooked up to such a device, the office probably wouldn't need to pay any power bills. You have to admit that generating electricity simply by typing on a keyboard or keeping in touch with your friends is a pretty bright idea.