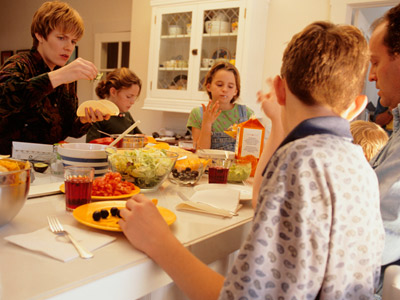 Research suggests that people might be more likely to eat at home when gas is expensive.
Buccina Studios/Photodisc/Getty Images

According to Charles Courtemanche in his doctoral dissertation in health economics, "A Silver Lining? The Connection between Gasoline Prices and Obesity," a causal relationship between rising gas prices and the reduction in body weight is theoretically possible. Based on his analysis, he proposes that for every $1 increase in gas prices, obesity rates will decrease correspondingly by as much as 9 percent after seven years, while saving 11,000 lives and $11 billion annually [source: Courtemanche].

The relationship between gas prices and weight is complex but basically twofold: When fuel prices soar, transportation costs increase and family budgets tighten.

When gas prices increase, people naturally look for ways to keep their dollars out of their gas tanks. In lieu of driving, they may change their routine. For example, they may choose to leave a gas-guzzling car parked at home in favor of walking, biking or taking public transportation to their destination. This adds more physical activity to their day -- good for weight loss because exercise eats up calories.

Secondly, Courtemanche suggests that because of the increased financial burden of higher gas prices, people may also change their dining habits.

Obesity rates rose 8 percent between 1979 and 2004 [source: Courtemanche]. Fuel prices declined, and during the Reagan administration, farmers with the biggest crop yields received the biggest government subsidies -- many farmers increased production to get in on that funding. Greater food production led to cheaper and bigger portions, notably in the fast-food industry, which in turn led to a calorie explosion: During the 1980s, available calories per capita rose to a whopping 3,900 a day [source: Doyle].

An increase in transportation costs doesn't just mean pain at the pump; the pain is also felt at the grocery store. When farmers and producers spend more to transport food from farms and warehouses to local stores, that cost is passed along to the consumer.

Less disposable income due to higher gas prices means less money to spend on food, whether dining in or out. Let's go back to that $1 rise in gas prices in a year. By Courtemanche's calculation, such an increase would reduce the number of meals eaten out by 6.5 meals. When a person eats 6.5 fewer restaurant meals a year, he or she saves 6,825 calories over a three-year period -- 6,825 calories is equivalent to just under 2 pounds (0.9 kilograms), 2 pounds of weight not gained [source: Courtemanche]. Home-cooked meals are generally less expensive -- and generally healthier -- than eating out, and tight household budgets can lead to a reduction in the slice allocated for food.

­Courtemanche's research is a starting point for policy makers but not everyone agrees with the link between increasing gas prices and weight trends. Dan Sperling, head of the Institute of Transportation Studies at the University of California, Davis, believes people don't change their diet and exercise behaviors in the face of rising fuel costs, but rather defer to the easier, and lazier, solution: buying a fuel-efficient car [source: Scott]. Ultimately, it's an individual's choice where to put a stretched dollar -- in the tank or in the bank.