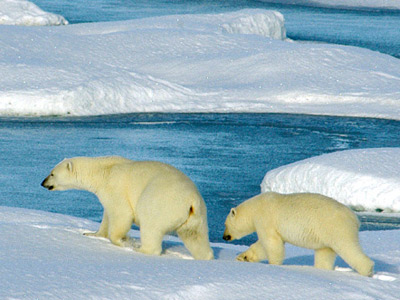 Have we reached an irreversible state of global warming?
Image courtesy of the U.S. House of Representatives

If climate change is irreversible, does that mean it could take all cars off the road and it would never have an effect?

It's not quite that dire. According to the 2009 study, we could be looking at a thousand years of warmer temperatures even if we make dramatic cuts in CO2 emissions right now. So technically, it's not "irreversible" -- any of our descendants born after the year 3000 will be able to reap the benefits of our CO2 cuts (whew!).

We have apparently made it to the point of no timely return.

In terms of sea ice, that point became apparent years ago when Arctic ice stopped replenishing itself. Usually, ice melts to a certain level in summer months and freezes back to a certain level in winter months. Starting around 2003, the ice stopped recovering [source: Connor]. For that year and each year since, the ice melted more than usual in summer, and froze less than usual in winter, resulting in an overall loss of "permanent" ice. For September, the average sea ice coverage has typically been 2.4 million square miles (7 million square kilometers); in September 2007, sea ice covered only 1.65 million square miles (4.27 square kilometers) of the Arctic Ocean, the lowest point on record [source: USA Today]. Some experts believe there may be no summer ice in the Arctic within 10 years [source: USA Today].

The atmospheric CO2 situation isn't much better. We currently have 385 parts per million (ppm) of CO2 in our air; scientists are pushing for CO2 caps that will get us stabilized at 450 ppm in the next few decades [source: New Scientist]. Many people believe this goal isn't politically feasible, and have set 550 ppm as a more reasonable target [source: New Scientist]. But new research suggests it may not even matter. That 2009 NOAA-led study states that at 450 ppm, we're still looking at severe, unavoidable drought conditions in Africa, southern Europe, western Australia and the American southwest. And if we reach 600 ppm, expanding warm waters could make ocean levels rise by 3 feet (1 meter) in the next thousand years [source: Modine]. That number gets even higher if you take into account melting glaciers.

Scientists aren't proposing we stop buying hybrid cars, though. The faster we act to make huge cuts in CO2, the better the prognosis. If we can make dramatic changes right now, perhaps we could get the atmosphere stabilized at 400 ppm instead of 550 ppm. That would at least increase the chances that the U.S. West Coast will still be above water in 3000. Probably.

For more information on global warming and related topics, look over the links below.