What are green-collar jobs? 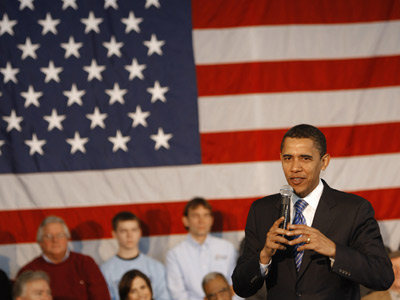 Barack Obama plans to increase the number on green-collar jobs in America. He spoke in March, 2008 at a meeting on green jobs in Ohio.
Emmanuel Dunand/AFP/Getty Images

Governments -- both local and federal -- are helping the environment and creating green-collar jobs by passing policies requiring energy and water conservation, alternative energy sources, more open space and locally grown foods. Twenty-eight states now require that 10-25 percent of their energy come from renewable sources in the next decade or so [source: Greenhouse]. If a state mandates, for example, that 10 percent of its homes must have solar panels, workers are needed to build and install all those panels.

States have also been courting green jobs from abroad. The Spanish wind turbine company, Gamesa, has built two factories in Pennsylvania. Together these factories employ some 1,300 workers [source: Greenhouse].

On the national level, President Bush signed the Green Jobs Act in 2007, authorizing $125 million for green-collar jobs training programs. Although industry analysts say the money isn't nearly enough to help fill all of the green-collar jobs that will be needed in the future, the program will train about 30,000 workers a year [source: Sightline Institute]. In particular, the program is designed to help veterans, displaced workers, at-risk youth and poverty-stricken families find jobs with living wages.

Green-collar jobs are likely to get a boost from President Barack Obama. He has pledged to spend $150 billion on clean energy projects over the next 10 years to create 5 million new green-collar jobs [source: BarackObama.com].

How do people feel about green-collar jobs? There are many fans, including labor unions. With an estimated 3.3 million American jo­bs expected to go overseas by 2015, it's no surprise that the country's unions are in favor of jobs that, for the most part, can't be outsourced [source: PBS]. Buildings in New York can't be retrofitted in China to make them more energy-efficient. Solar panels for California homes can't be installed in India.

The United Steelworkers Alliance is so excited about the idea of green jobs that it has formed an unlikely partnership with the Sierra Club, called the Blue Green Alliance. The goals­ of the alliance are to increase public awareness of environmental issues and boost investment in green jobs.

Unions aren't the only ones getting excited about green-collar jobs. Environmentalists say these jobs can help combat global climate change. And community organizations see green-collar jobs as a way out of poverty for many people. One city-sponsored program in Richmond, Calif., is helping underprivileged youths learn how to install solar panels.

Yet not everyone is so excited about the idea. Some critics claim green-collar jobs are just another fad that, like the dot-coms, will eventually go bust. They also say green-collar jobs will steal away manufacturing jobs from other industries, such as traditional fuel companies.

­However people view green-collar jobs, there's no question that these jobs are going to be a huge part of the employment sector in the years to come.