What is green noise and how could we use it? 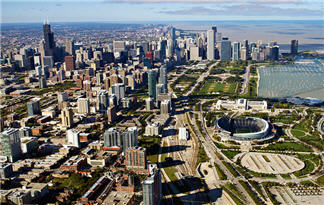 As global energy demands rise and the effects of burning fossil fuels on the climate become increasingly devastating, researchers are leaving no stone unturned in the search for new energy sources.

While energy production technologies have made remarkable advances in recent years, many of them still depend on basic mechanics. Hydro and wind power rely on the turning of turbines to generate electricity. The sensations of being pulled by a wave or pushed by wind are commonplace, but so is what you feel sitting at a red light next to a car with the music blasting and the bass all the way up.

But can sound waves, like ocean currents and gusts of wind, be harnessed and used to produce energy? That is the question of green noise.

Last year, a design by Hung-Uei Jou swept through the blogosphere: a device to trap sound energy and convert it into electricity. Looking something like a Roomba, the Green Noise would be laid along airport runways and highway shoulders to benefit from landing jets and streams of automobile traffic. But while the design looks great, it's a bit light on specifics, such as how it actually works.

However, there's a much more common design that's been converting sound waves into electricity for decades- the microphone. The problem is that a microphone produces electric signals, not electricity that can be used to power refrigerators or cars.

The problem is that sound waves don't actually contain a significant amount of energy to harness, especially compared to high winds or rushing water. But that doesn't mean the concept will never be realized.

A more realistic (and detailed) project from two South Korean scientists, Dr. Young Jun Park and Sang-Woo Kim, would harness the sound waves produced by human conversation to power cell phones. Their research is still in an early phase, but they have produced electricity from sound waves, just not a lot.

Ultimately, it looks like sound waves will never be a major source of electricity, but if they can be properly applied, they could certainly play a role.