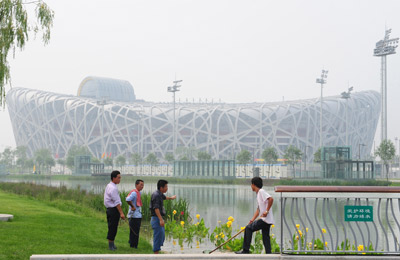 When China promised to hold a "green Olympics" in 2008, the country may have bitten off more than it could chew. The promise helped Beijing win the bid for the games, but the city struggled to keep its word [source: Wired]. However, no one questioned the country's commitment: China implementing severe restrictions to try to clear Beijing's skies and turn it into the most environmentally friendly Olympic venue ever. It was a tall order.

The air is so bad that many of the world-class athletes converging on Beijing for the Olympic Games brought along face masks as part of their sports equipment. Competing outdoors in Beijing had the potential to trigger asthma in people who have never had it [source: Wired].

So was it possible for Beijing to make itself green for the Olympics? It all depends on your definition of green -- whether it means an environmentally friendly Olympics or an environmentally healthy city. China pulled out all the stops to achieve both goals, but the former seemed like more of a long shot.

In this article, we'll find out how China tried to fulfill its commitment to a green games. The extreme effort to clean up one of the world's most polluted cities is a testament to the power of a one-party government: Many countries wouldn't be able to accomplish what China did in such a short period.

­On the next page, we'll see how China tried to change Beijing's hazy reputation.

London's bid for the 2012 games promises the greenest Olympics in history. The international trend toward extraordinarily green events is featured prominently in plans for the 2012 games. According to the city's "Towards a One Planet Olympics" document, London will implement "zero waste and low carbon strategies, local supply networks, sustainable transport, wildlife biodiversity and an ongoing legacy for a sustainable community." For more information, see BioRegional: One Planet Living Olympics. 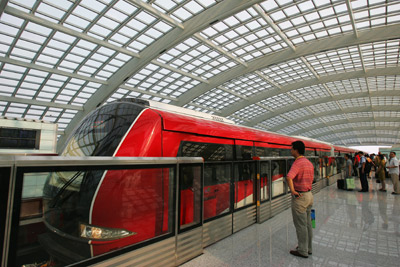 Years ago, China committed $12.2 billion toward greenifying Beijing if the Olympic Committee would give it the 2008 games [source: Wired]. Considering that China actually manufactures most of the world's alternative-energy technologies, including solar water heaters and solar photovoltaic cells, this would seem to be a natural fit [source: AFP]. But almost all of those technologies are simply exported to wealthier countries. Beijing would have to change its way of operating, and the government would have to back the effort whole heartedly. In fact, China implemented restrictions that would make most of us cry "oppression."

Since winning its Olympic bid, China has torn up the city to build subway lines, another effort at keeping cars in their garages. In addition, Beijing has a new fleet of electric buses and battery-powered garbage trucks.

But the plans went beyond the roads. Known for its lack of environmental regulations in the business sector, China had to implement new restrictions to try to clear the air. Power plants had to integrate scrubbing systems; coal furnaces shut down completely and the government pushed steel mills outside city limits. No one was allowed to use spray paint outdoors.

And for Beijing contractors not working on Olympic venues, business stood at a standstill: There was a ban on all non-Olympic construction projects starting on July 20, 2008. Beijing's water treatment facilities were upgraded to produce cleaner water throughout the city, lest Olympic athletes be afraid to take a shower in one of the new, super-green Olympic facilities. Before 2001, Beijing had three sewage treatment plants. In 2006, that number jumped to 14 [source: Beijing 2008].

For those who visited Beijing before the Olympic hubbub, the city might have looked a little different, too. Tens of millions of trees have been planted in the last few years -- an effort at carbon-dioxide removal and a literally green Olympic venue.

The results of all these changes were somewhat mixed. While pollutants coming out of Beijing  decreased, that was only part of the problem. A huge amount of air pollution from coal-fired energy plants and factories comes from the countryside -- outside Beijing. One study by U.S. and Chinese scientists found that up to 70 percent of air particulates in Beijing actually come from other cities and towns [source: Wired]. So cleaning up Beijing itself is sort of like pumping water out of a lake while it rains.

It also didn't make China much cleaner in the long run. Beijing only comprises 3 percent of China's total energy consumption [source: AFP]. Limiting the exhaust from Beijing's factories hardly affects the overall greenhouse-gas output of the country as a whole.

Still, Chinese officials said this Olympic clean up was just the beginning of the effort to make China more green. Certainly Beijing's new healthy infrastructure -- water treatment, subway trains and power-plant scrubbers -- will stick around after the games. And the facilities for the games themselves are nothing short of an Al Gore fantasy.

On the next page, we'll take a look at some of the other impressive technology that will serve as a model for all green Olympics to come. 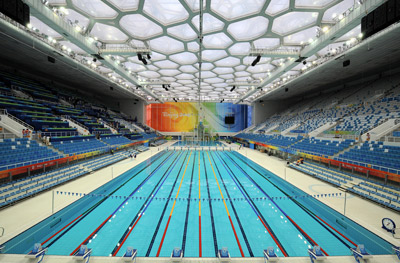 Beijing's big cleanup may have run into some snags, but the games remain a lesson in green technology.

The new natural-gas power plant in Beijing that powered the Olympic village creates clean power worth an estimated $100 million in Kyoto Protocol carbon credits [source: Wired]. An estimated 25 percent of all power for Olympic venues came from alternative energy sources like sun and wind [source: AFP]. Just a few of the other green systems in place included:

In all, the power savings were as high as 50 percent over conventional power systems [source: AFP]. And the innovations touch on the state-of-the-art, as well: The famous "Water Cube" aquatics center is insulated with a high-efficiency polymer skin called ETFE, which was originally developed for NASA to insulate the space station [source: Design Build Network].

When many athletes chose to train outside Beijing for the Olympic lead-up because of air-quality concerns, the haze over the city took first priority. According to Chinese government officials, air quality in July 2008 improved 20 percent over the previous July [source: New York Times]. The number of acceptable air days in 2007 was 246, compared with 100 in 1998 [source: IHT]. Most sources agree that the amounts of nitrogen dioxide and sulfur dioxide in Beijing's air have dropped in last few years. But to the naked eye, the air still looked extraordinarily polluted.

If air quality improved, why the hazy skies? Chinese officials said the summer took its toll. Unusually severe heat and rain, as well as a lack of wind kept the skies from clearing.

For more information on Beijing's "green Olympics" and related topics, sprint to the links on the next page.