Can I be green on a budget? 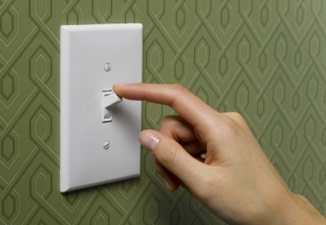 Simple things like remembering to flip the switch are small, do-able steps towards keeping money in your pockets and preserving the planet. Check out these green science pictures!
Jeffrey Hamilton/ThinkStock

With environmental disasters permanently residing in the headlines, the idea of living a green (or greener) lifestyle might appeal to you. The assumption is that going green can cost a lot of money, but it doesn’t have to, especially if you take it one weekend at a time. So here’s your guide to living a great green weekend -- and it even includes booze.

Organic Hair of the Dog

Green booze? It’s not just served on Saint Patrick's Day. Organic beer and liquor have all the alcohol, minus the hangover-inducing chemicals. "You can drink easier knowing that organic spirits come from ingredients raised without pesticides or petroleum-based fertilizers, which can end up in your glass," Idealbite.com’s Heather Stephenson told the New York Daily News.

Yes, potent organic potables often do cost more than their counterparts not certified by the U.S. Department of Agriculture (USDA). Absolut Vodka, for example, is made from the less costly grain of industrial farms and costs around $20 for 750 milliliters. The organic vodka Tru will run you between $30 and $40 for the same amount. But can you put a price on how you feel the next morning?

If you prefer beer to spirits, there are plenty of options there, too, like Peak Organic Ale's brews. Depending on how fancy you like your microbrews, springing for an organic one might not hit your wallet too hard. Order a 12-ounce bottle at a New York City bar, and it will cost between $6 and $8. That's less than a Duvel with a nice creamy head but more than a classic Guinness draft.

The next day, shake off your too-late Friday night with a cup of sustainable joe, best bought by your local roasters. And though you may not be able to afford a BMW X6 Hybrid or a 2010 Escalade Hybrid for a day trip, never fear. You might be able to pay for a membership to a car-sharing company. For example, a Zipcar membership costs $50 per year. (Day rates vary; check the car-sharing company's site for more information.)

You’ll also be doing your part for the environment; 90 percent of Zipcar members drove 5,500 miles (8,851 kilometers) or less per year. Meanwhile, each Zipcar takes 15 to 20 personally owned vehicles off the road. As its site says, "Multiply that by the more than 6,500 cars in our fleet and you’ve got a really big number."

Sizzle in Your Grizzle

For some folks, Sunday means grilling. Cooking over an open flame is always a treat, but it’s not always beneficial to the environment. According to thedailygreen.com, charcoal (and those easygoing briquettes are the worst offenders) creates clouds of soot that can lodge in the lungs. In addition, cancer-causing compounds like benzene are also released. What’s a hungry chef to do? Electric grills are your cleanest option, as they release 99 percent less carbon monoxide and 91 percent less carbon dioxide than charcoal, says the dailygreen.com.

If you can’t afford to buy a new grill, or are perfectly happy with your charcoal one, consider natural charcoal as your contribution to a healthy cookout. For example, Cowboy Charcoal hardwood charcoal (about $12 per bag, compared to about $10 for a bag of regular charcoal briquettes) burns quicker, hotter and cleaner, and is made of maple and oak leftovers from furniture factories.

Once you get into the practice of going green, chances are it will come more naturally until it is indeed more like a lifestyle and not just a whim. The key is not to go whole hog all at once or beat yourself up for buying nonorganic milk (or beer, as the case may be). Green, like so much of life, is all about compromise.