Is there a correlation between happiness and carbon emissions? 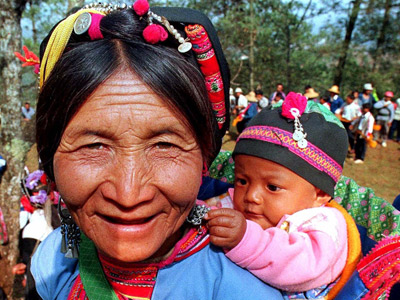 Bad air quality days may be becoming more common than bad hair days. Greenhouse gases including carbon dioxide (CO2), methane, nitrous oxide and fluorinated gases have been increasing in the Earth's atmosphere at an alarming rate since the industrial revolution. It's these gases that contribute to the code red days reported on the local news in the United States. CO2 emissions alone (those caused by burning fossil fuels) increased by a stunning 20 percent from 1990 to 2004 [source: Environmental Protection Agency].

Greenhouse gases are linked to climate change. The accelerated rate of climate change can already be observed around us, causing rising sea levels, stronger storms and more extreme temperatures, as well as disappearing glaciers and the loss of ecosystems. It's not only the planet that suffers from the effects of these greenhouse gases, though. If climate change keeps trending this way, scientists predict extreme weather coupled with increased smog from air pollution will leave humans more susceptible to heart disease, respiratory illnesses such as asthma, as well as disease outbreaks and untimely death. A global temperature increase of about 2 degrees F (1 degree C) translates into roughly 1,000 more deaths each year in the United States and 20,000 air pollution-related deaths around the world [source: ScienceDaily].

­However, it's not only our bodies we should be concerned about, but our happiness, too: Carbon emissions may be putting it at risk. A correlation between happiness and carbon emissions? Perhaps so.

­Philosophers and social scientists have been thinking about happiness and how to define it for ages. Happiness itself is subjective -- what makes you happy may or may not make someone else so. Studies measuring happiness, including the World Database of Happiness project, rely on subjective data rather than objective data, and generally define happiness as how satisfied a person is with the quality of his or her life. What causes us to be happy or unhappy greatly varies from person to person and among cultures -- Americans, for example, often find happiness through retail therapy. Recently, the New Economics Foundation (NEF), a think tank, developed a formula for measuring how human happiness doesn't have to come with energy consumption and social inequality as its price tag.

Typically, our environment and our social health are discussed in separate conversations, maybe blending together only after a catastrophic weather event or conflict. The Happy Planet Index (HPI), however, changes this separation.

The HPI is the New Economics Foundation's (NEF) solution for measuring how happy we are -- not through riches or power, but instead on the concept that what you give is what you get. Researchers use a formula to analyze a country's ecological efficiency (carbon footprint) in relation to the physical welfare (life expectancy) and emotional well-being (life satisfaction) of its population.

But while life expectancy rates and carbon footprints are objective measurements, putting numbers to life satisfaction is a bit trickier. To measure life satisfaction, NEF researchers surveyed individuals on a series of questions about varying aspects of daily life and life outlook and asked each to rank their responses on a scale of 0 to 10 (not at all satisfied to extremely satisfied). With this information they created the HPI equation:

Two coefficients of variance are introduced into the equation to ensure that both halves of the equation will match. To account for proportionate variations in c­arbon footprint distributions from country to country, a small constant (α) is added to the footprint. The product of life expectancy and life satisfaction is divided by the adjusted carbon footprint. That result is then multiplied by a constant (ß) to make sure all ranked countries fall onto the index scale of 1 to 100.

The result is a happiness rank for each country included in the index. There are currently 178 countries ranked on the Global HPI, and there's a separate European HPI ranking 30 countries.

Collectively, the HPI shows which countries are better or worse at translating energy consumption into happy, meaningful lives. The great insight is that big carbon footprints don't equal big happiness. No country's score indicates an overlooked paradise on Earth, but you may be surprised which nations are happier than others based on the HPI equation. The United Kingdom ranks relatively low, 108 out of 178, in the Global Index, whereas the small south Pacific island nation of Vanuatu ranks the happiest. Why didn't the U.K. outrank the small-scale economy of Vanuatu? The U.K. has an expanding carbon footprint and a population that self-reports low levels of happiness. In fact, the entire European continent's carbon footprint has increased by 70 percent since 1961 while happiness levels did not rise, and life expectancy only rose by a light 8 percent [source: BBC].

When you remove traditional economic wealth measurements from the equation, as the HPI does, countries that tread lightly on the planet come out on top. Gross domestic product (GDP) can't buy happiness, but perhaps reducing overall consumption of resources and putting emphasis on living a meaningful life can.

How Do You Rank?

Currently Vanuatu scores the highest HPI at 68.2 and Zimbabwe the lowest at 16.6. Western countries vary greatly: Malta scores 53.3, the U.K. 40.3 and the United States 28.8. Many Western countries end up with middle-to-low HPI scores because of their big carbon footprints. Despite long life expectancy and fair life satisfaction levels in the U.S., the ecological footprint brings down the score to that of Rwanda.