How the Iowa Stored Energy Park Will Work

What is the Iowa Stored Energy Park? 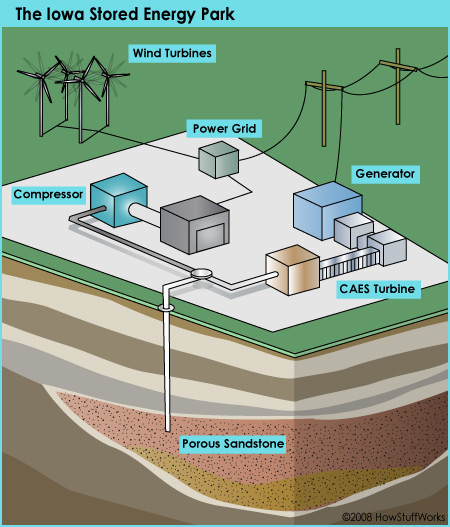 Electricity at the Iowa Stored Energy Park will be generated by wind turbines. Excess wind will drive a compressor and be stored in sandstone underground for later use.
2008 HowStuffWorks

The ISEP concept was first proposed in 2003, when members of the Iowa Association of Municipal Utilities (IAMU) formed a study committee to explore how wind energy could be used in creative ways to supplement the state's power production.

Iowa is the third largest producer of wind energy in the United States, just behind California and Texas. To advance its leadership position in wind production even more, the IAMU study committee knew that another large wind farm -- even one containing state-of-the-art, super-efficient turbines -- would not be enough all by itself. They needed a mechanism to store energy. The committee proposed a power plant that would integrate two key elements: a 100-megawatt wind farm and a compressed air energy storage facility.

The idea behind ISEP is based on two successful CAES facilities already in operation -- one in Huntorf, Germany, operated by Nordwest Deutsche Kraftwerke since 1978; and another in McIntosh, Ala., operated by Alabama's Electric Cooperative since 1991. Both of these facilities store compressed air underground. The Huntorf plant uses salt caverns as its storage reservoir. The McIntosh plant uses preexisting mines.

The ISEP planning committee wanted to experiment with storing compressed air in an aquifer. An aquifer is an underground layer of rock that is capable of holding water. The rock can do this because it contains millions of tiny spaces between rock and gravel particles. These little spaces trap water and hold it. As it turns out, this highly permeable rock can also be filled with air. In fact, if you pump air into an aquifer under great pressure, it acts like a giant bubble and displaces the groundwater. A few months after it initiated the study, the committee found an aquifer near Fort Dodge, Iowa, that seemed ideal. The aquifer was close to the electric transmission grid and a gas pipeline. However, the site eventually proved unsuitable for a variety of reasons.

As the team began screening other sites, it also went through some organizational changes. In 2005, the IAMU committee passed responsibility for ISEP to the Iowa Stored Energy Park Agency (ISEPA), an Iowa corporation representing more than 130 municipal utilities in Iowa, Minnesota and the Dakotas.

Two years later, in January 2007, the agency finally completed its screening process and settled on a site just west of Dallas Center in central Iowa. The site is ideal for a few reasons. The aquifer, 3,000 feet (914 meters) below the surface, is deep and wide, which means it can store a large amount of air. Another appealing feature is the site's geology. The aquifer is comprised of layers of sandstone capped by dense shale. Sandstone is very porous and holds both air and water well. Finally, the site is within 30 miles (48.3 km) of downtown Des Moines, which is good for economic development. The agency hopes that ISEP will become a tourist destination, and being close to the state capital could bring in more traffic.

The Dallas Center site is not, however, the best wind area in Iowa. As a result, ISEPA is investigating the possibility of a remote wind farm. The agency could build the farm or it could contract with an existing privately owned wind farm. Either way, wind is a critical component of the project. In fact, using wind as an energy source is one of the main ways in which the ISEP is different from the Huntorf and McIntosh plants. Both Huntorf and McIntosh use off-peak electricity from traditional nuclear or coal-burning power plants to run the compressor that pumps air underground. ISEP will use wind-generated electricity to run the compressor and will direct any excess energy back to the grid. By using CAES and wind power together, ISEP will be able to provide an environmentally friendly, alternative energy source for homes and businesses.

In the next section, we'll look at how exactly ISEP will make electricity.