How Living Off the Grid Works 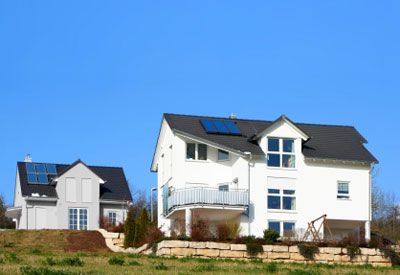 The first thing you need to do to go off the grid is to rid yourself of dependence on electricity from your power company. The most common way to do so is by using the sun and the wind to provide your power. Neither concept is new, but more people are turning to these constant power sources to help offset or replace their reliance on electricity fueled by burning coal. You can read in detail about solar and wind energy in the articles How Solar Cells Work and How Wind Power Works -- but we'll explain the general concept here.

Residential homes that use solar power typically have photovoltaic (PV) solar panels located on the roof or near the house. These panels contain cells made up of silicon semiconductors. When the sun's light hits the panel, these semiconductors collect the energy and knock electrons loose so they can flow freely. An electric field in the panel then takes these electrons and forces them to flow in one direction, creating an electrical direct current (DC). The DC is then passed through an inverter that simply converts this DC into the alternating current (AC) that your home uses.

Wind power works in a similar fashion. A typical residential wind turbine looks like an airplane propeller sitting atop a 50 to 120-foot tower. When the wind blows, the blades start moving and spin a shaft that leads from the hub of the rotor to a generator. The generator takes the energy produced from the rotation and turns it into electricity. Like solar cells, the energy created by wind turbines is converted into usable AC power with an inverter.

Many people pair their solar and wind energy with traditional power to create a hybrid system that will reduce their bills. In these cases, the energy created is stored by the utility company. If the energy you produce is greater than your consumption, 40 states actually allow you to sell your electricity back to the utility company. However, to go off the grid, you need to cut ties with the power company altogether. In this case, the energy you create is stored in a system of batteries as DC power and converted to AC power as you need it. The battery system is typically located in a garage or shed near the power source.

Wind power is the cleanest and cheapest energy technology in the world. The average cost per kilowatt hour for coal-burning electricity was 10.4 cents in 2006 [source: Energy Information Administration]. Wind energy can be generated for a scant three cents per hour in optimum conditions [source: Earth Policy Institute]. Add to this that there are no greenhouse emissions produced, and it's no wonder that wind power is growing so fast.

In the next section, we'll see how you can ditch your water and sewer services to get you off the grid.

Los Angeles City College (LACC) started a bold plan in 2006 to take all nine of their campuses off the grid. By installing enough PV panels to generate one megawatt of power per day, LACC hopes to lead the way in the use of sustainable energy on college campuses. This system of community college campuses serves more than 185,000 students in the greater Los Angeles area. They also have plans to offer sustainability and green building courses to their curriculum. LACC is growing fast and has plans to build more than 40 new buildings that meet or exceed the standards set by the Leadership in Energy and Environmental Design [source: treehugger.com].