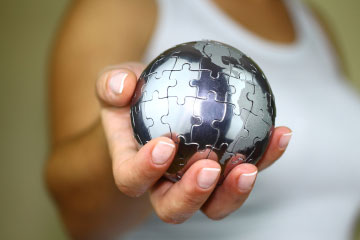 Anyone who's ever tried to hold two magnets together has felt the surprising power of magnetism. If the magnets have opposite poles, they'll attract each other so forcefully that they may leap from your grip and go skidding across the floor. On the other hand, if they share polarity, they'll repel each other. With such huge stores of invisible power, isn't it likely that magnetism could be a source of efficient, green energy?

Harnessing magnetism to produce energy is an idea that's been around for years. Several companies on the Internet claim to have produced magnetically powered perpetual motion devices that run completely on their own, infinitely, without ever stopping. Physicists have long warned that such devices are impossible, however. The idea that a machine could generate energy without first being powered itself by some outside source violates the first law of thermodynamics. Furthermore, machines that supposedly operate indefinitely with no friction and no need for cooling systems violate the second and third laws of thermodynamics.

Even though perpetual motion generators are a theoretical impossibility, new research suggests that magnetism may play an important role in a number of other emerging clean technologies. Recently, scientists at the University of Michigan concluded that it may be possible to use magnetic fields to collect solar energy directly without the need for semiconductors, potentially reducing the cost of solar power [source: EPOnline].

Researchers are also working on a number of other green technologies involving magnetism. Some day soon, we may be able to recharge magnetic batteries with a few vigorous shakes. Yale researchers have also invented a lead-free solder that uses a magnetic field to melt a tin-silver alloy. Removing lead solder from household electronics would make them considerably cleaner, greener and more recyclable. Last but not least, engineers at Columbia University are experimenting with nanomagnetic materials to make computer chips more energy efficient.

Feel drawn to the next page? There's lots more information after the jump.

Have invasive species caused any extinctions?
Could You Dig a Tunnel Right Through the Center of Earth?
How Rain and Snow Could Play a Role in Triggering Earthquakes