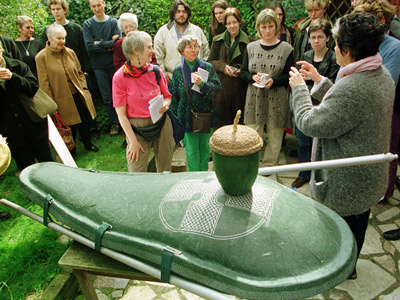 An Ecopod and an acorn urn are displayed at a natural burial event. Both reflect the growing demand for environmentally sound funerals.
Sion Touhig/Newsmakers/­Getty Images

­Birds do it. Bees do it. And unless someone discovers a method of prevention, you're going to do it, too -- die, that is. Death is big business. Our conventional, Western-centric idea of a traditional burial usually means funeral directors, embalming, caskets, cemetery plots, vaults, headstones, flowers or maybe even being shot into space. In the United States, the funeral home industry generates about $11 billion in annual revenue and is growing [source: CNN]. But it hasn't always been so complicated.

What we now think of as traditional burial didn't become the trad­ition until the Civil War when bodies were embalmed for preservation while transported home. Embalming gives the dead a lifelike appearance -- a sort of morbid Madame Tussauds look -- and that appearance remains de rigueur in today's funeral industry. Before the Civil War, burial often took place in simple graves in tall grasses. That simplicity is beginning to make a comeback. In a poll by AARP, more than 70 percent of those asked chose green burial as the most appealing burial option [source: Green Burials].

­But what is a green burial? Green burials, also called natural burials, are thought to have started in the late 1980s in the United Kingdom as a backlash against crowding limited land resources with cemeteries. While definitions of what makes a burial green vary, the idea is to eschew unnatural practices -- no formaldehyde-based embalming, metal caskets or concrete burial vaults. You may be thinking this sounds a bit hippie; after all, if you're dead, what difference does it make if your death care is green? Think of your legacy -- every year 22,500 cemeteries in the United States bury: 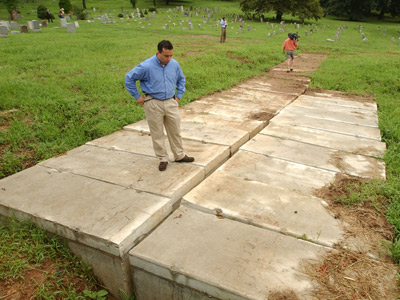 ­On average, a traditional funeral and burial can cost up to or more than $10,000 [source: Goldstein]. That gets you the basics -- embalming and a casket, ceremony and burial; flowers, limos, obituaries, vaults and other trappings are all extras. The financial burden isn't the only problem. The things involved with our traditional funeral practices are deadly to the environment.

Let's start with embalming. Although it's routine, it's not actually required in the United States (unless, in some cases, burial is delayed beyond 24 or 48 hours). Embalming mummifies a body; it involves removing all bodily fluids and gasses and replacing blood with a formaldehyde-based solution for preserving and disinfecting. The World Health Organization classifies formaldehyde as a carcinogen yet the American funeral industry uses enough to fill eight Olympic-size swimming pools every year [source: Corley]. As of 2010, formaldehyde will be banned in the European Union because of its carcinogenic effects.

Next, embalmed bodies typically inhabit steel-lined wood caskets, and caskets are often interred in steel or concrete vaults (vaults, like embalming, are common but not required by law). To keep up with American demand, roughly 30 million board feet (71,000 meters3­) of casket wood is felled every year [source: Scientific American]. And we're not talking about pine boxes -- some of this wood comes from tropical hardwoods, such as mahogany. The amount of steel used in caskets and vaults yearly in North America is equivalent to the amount used in the Golden Gate Bridge. And let's not forget concrete -- with the amount used in vaults you could build a highway between San Francisco and Portland. The manufacturing and transport of caskets and vaults requires large amounts of energy.

Burial isn't the only conventional funeral option. Cremation dates back to the early Stone Age; it's still popular today and it's cheaper than traditional burial. In the United States, 32 percent of corpses are cremated. By 2025, the Cremation Association of North America estimates that number could rise to about 57 percent [source: ­Lorek]. Outside the United States, the rates are even higher: 42 percent in Canada, 71 percent in Great Britain and more than 98 percent in Japan [source: Funerals with Love].

Cremation is cheaper, perhaps, but not greener. The process involves embalming and caskets, and the burn releases fossil fuels (dioxin, hydrochloric acid, hydrofluoric acid, sulfur dioxide and carbon dioxide) into the atmosphere and toxic chemicals from the­ embalming fluid (as well as mercury from dental work). It takes a lot of energy to cremate a body -- harness the energy from cremations done in a single year in the United States and you'd have enough to travel to the moon and back 83 times [source: Greensprings Natural Cemetery Preserve].

­Although it's long been thought that cremation was the more cost-efficient and environmentally friendly option, it's not looking so hot with growing concerns about cremation pollution. Green burials are often the cheapest route -- they can range in price from almost nothing to hundreds or thousands of dollars, depending on how fancy they are. 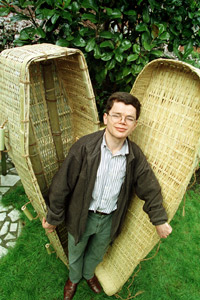 The designer of an eco-friendly bamboo coffin shows off his wares at the Natural Death Centre in North London.
Sion Touhig/Newsmakers/Getty Images

Ralph Waldo Emerson wrote, "Our fear of death is like our fear that summer will be short, but when we have had our fill of fruit, our swelter of heat, we said that we have had our day." We have plenty of anxiety about death already; do we really need to add eco-anxiety into the mix? But green funerals aren't really any more difficult to arrange than the traditional kind.

Green funeral practices are as varied as traditional methods, but all the details of the process feature biodegradable materials. Embalming fluid is replaced with refrigeration or dry ice, both nontoxic. Caskets and urns are sourced from sustainable woods; shrouds are woven from natural fabrics such as cotton, silk or linen. For those more adventurous souls, wooden caskets can be replaced with cardboard or wicker versions, or with an Ecopod. Ecopods are 100 percent biodegradable kayak-shaped caskets made from recycled newspapers. They come in two sizes and a variety of colors. Indian red with an Aztec sun design? For a few thousand dollars, it's yours.

The benefits of a green burial come not only from the elimination of embalming fluids, metal, tropical wood and concrete, but also from the development of green cemeteries. The United States now has about a dozen green cemeteries, while Great Britain has about 200 [source: Corley].

­The council has also established categories of green cemeteries, as well as standards for traditional cemeteries wishing to accommodate green burials. Hybrid burial grounds are cemeteries that practice both green and conventional burials. Such cemeteries must designate an area of land for green burials, and in that area, use only biodegradable products, no vaults and no toxic chemicals. Natural burial grounds practice land stewardship and restoration planning -- they use sustainable burial methods and are restricted to using the grounds exclusively as a green cemetery. Conservation burial grounds take natural burial grounds to the next level. They are green cemeteries that have joined with a conservation partner and adopted the principles of restoration ecology. Here the council brings cemetery owners and conservation organizations together to establish a conservation easement. A conservation easement is a legally binding agreement that limits the type and/or amount of development a landowner allows on a piece of property. Conservation burial grounds must practice sustainable and ethical burials in addition to protecting the open space, wildlife and habitat of the grounds.

­Not sure whether a conventional or green burial ground is for you? Some states allow home burials -- with a check on local zoning laws, you could rest eternally on your own property. You could also avoid burial altogether and try converting your ashes into a diamond or a reef.

While more than 70 percent of Americans polled by AARP prefer green burials, the services and practices are relatively new and many funeral directors have yet to catch up. The National Funeral Directors Association, the Green Burial Council and a few other organizations and publications are educating the funeral industry -- and consumers -- about how to break with tradition and go green. If your local funeral home doesn't practice green services, they can likely point you in the right direction. 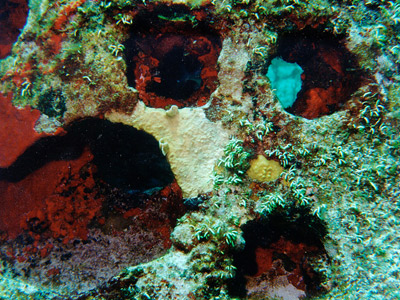 ­If the ­idea of spending eternity in a box or as dust in the wind lacks a certain appeal, there's something for you behind door No. 3. There are some nontraditional and cutting edge ways to memorialize yourself after death, either with cremains (cremated remains) or with your corpse. Let's start with cremains.

Human remains are mostly carbon. What else made of carbon comes to mind? Pencils (graphite) and diamonds. In theory, you could have your cremains turned into either. The Carbon Copies research project -- purely conceptual right now -- envisions your ashes as a lifetime supply of pencils (that'd be 240 pencils), each stamped with your name and contained in a pencil box with a built-in sharpener. As each pencil is sharpened, the shavings, which are your ash, are held within the box turning it into an urn.

Not interested in reincarnating yourself as a box of pencils? Give your cremains to LifeGem, a company in Illinois, and in 18 weeks, they will have transformed them into a one-carat diamond through high heat and pressure. Or live out your afterlife under the sea as a memorial reef ball. Eternal Reefs Inc. mixes cremains with concrete to create artificial reefs -- the company is even open to memorializing your pet this way.

If you'd prefer to skip cremation, there are some other wild ideas to think about, some conceptual and some real. A Swedish environmental consultant has proposed an eco-friendly alternative to burial and cremation: freeze-dry a body in liquid nitrogen while blasting it with ultrasound waves, then shatter the brittle body to make a hygienic soil-enriching powder. While the process has only been tried on dead pigs and cows so far, a 176-pound (80-kilogram) person would generate about 44 pounds (20 kilograms) of powder [source: Morgan and Miller].

Or, instead of shattering how about dissolving your corpse? Through a process called alkaline hydrolysis, your corpse is liquefied in a steel cylinder with a combination of lye, 300-degree Fahrenheit (149-degree Celsius) heat and 60 pounds of pressure per square inch (4.2 kilogram-force per square centimeter) [source: Cheng]. The process, which isn't yet used in funeral services but has caught the interest of some in the industry, results in a thick, brown liquid that can be safely poured down the drain.

­Modern death care is giving new meaning to the adage, ashes to ashes, dust to dust -- just add to that liquid down the drain.