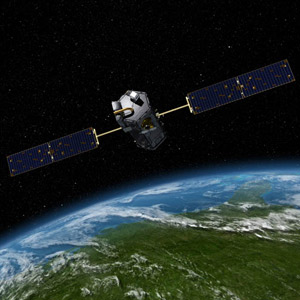 An artist's concept of the Orbiting Carbon Observatory.
Photo courtesy of NASA/JPL

­Every year, humans add more than 8 billion metric tons of carbon dioxide (CO2) into the Earth's atmosphere by burning fossil fuels, clearing and converting land, and practicing slash-and-burn agriculture. The planet itself produces about 300 billion metric tons of CO2 gas each year through natural events like forest fires and decay, but activities such as heating a home or driving a car don't fit in with this natural carbon cycle [source: Klotz]. It is thought that humans have caused a 20 percent increase in CO2 levels in our atmosphere in the last 50 years [source: MarketWatch].

Why should we care how much CO2 is in our atmosphere? The planet naturally absorbs and reflects the sun's heat, maintaining a life-sustaining temperature. When too much CO2 is in the atmosphere, however, the sun's heat becomes trapped, and is unable to escape into space. In turn, it causes the surface of the planet to heat up -- this is known as the greenhouse effect. CO2­ that is released from human activities is considered a driving force behind our planet's climate changes.

­Currently scientists are able to measure CO2 emissions via the Carbon Dioxide Information Analysis Center, which monitors CO2 levels from a network of ground instruments. Additionally, NASA has a CO2 detector on the Aqua satellite, which measures greenhouse gases present within 3 to 6 miles (5 to 10 kilometers) of the Earth's surface. From these measurements, scientists know that about 40 to 50 percent of the CO2 resulting from human activity stays in the atmosphere -- they theorize that our oceans and foliage absorb the rest, but without additional data, it remains unknown [source: MarketWatch].

­Scientists now have a new tool in their arsenal against climate change: the Orbiting Carbon Observatory (OCO). We know that once CO2 is released into the atmosphere, it lasts on average for about 300 years, although 20 percent lingers on for 10,000 years or more [source: Klotz]. But with the OCO orbiting the Earth, we'll now have a map of CO2­ in the atmosphere that will help track and monitor the greenhouse gas. Let's find out more about how the OCO works and what scientists are able to do with the data.