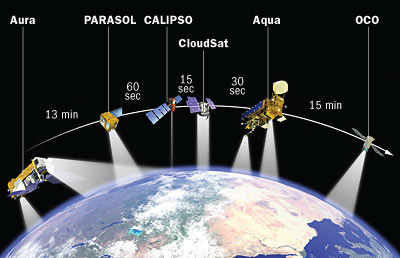 The Orbiting Carbon Observatory will be the first satellite in the A-Train.
Photo courtesy of ­NASA

­In early 2009, the Orbiting Carbon Observatory (OCO) was launched into space on a Taurus rocket at Vandenberg Air Force Base in California. The OCO is a satellite built by Orbital Sciences Corporation for NASA, and its mission is part of NASA's Earth System Science Pathfinder (ESSP) program.

The OCO is a climate observation instrument that joins a group of satellites from the United States, Canada and Europe known as NASA's Earth Observing System Afternoon Constellation or A-Train: Aqua, Cloudsat, Calipso, Parasol, Aura and soon Glory. The A-Train is a constellation of satellites that cross the equator in succession every day just after noon. This group of satellites specializes in monitoring climate and carries instruments used to observe climate change -- specifically how water systems, atmospheric chemistry, clouds, aerosols and solar radiation interact and affect the climate.

The OCO leads the A-Train. It's the first instrument designed to collect space-based measurements of ­Earth's carbon cycle, and its mission is to pinpoint the exact distribution of CO2 around the globe. The OCO maps CO2 sources and sinks -- the places where CO2 is released and absorbed -- on a repeat 16-day cycle during the project's two-year span.

While pre-OCO data laid the groundwork for understanding carbon emissions, it's always helpful to have more detail. Where are the most problematic sources of CO2? Where is the greenhouse gas really being absorbed? Such measurements will complete crucial missing pieces of the climate puzzle for scientists: How much CO2­ is in the atmosphere, where is it precisely and how much is being recycled by the planet and where? These maps could even put an end to countries pointing fingers at one another regarding greenhouse gas output. Predicting emissions outputs will no longer be a guess.