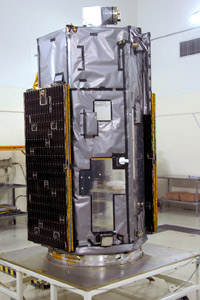 The Orbiting Carbon Observatory is displayed in late 2008 after blankets and edge tape were applied.
Photo courtesy of ­NASA/Robert Hargreaves Jr., VAFB

So how will the Orbiting Carbon Observatory work? The observatory is solar powered. It's made of honeycomb panels equipped with solar cells; an onboard computer ensures that the satellite is always facing the sun to charge its battery. The whole system requires about the same amount of power as nine household light bulbs [source: NASA] The computer, along with a GPS system, flies the satellite, manages the measurement tools and communicates with ground st­ations to receive commands and transmit data back to Earth.

The satellite weighs about 1,170 pounds (530 kilograms) and flies in a sun synchronous 438-mile (705-kilometer) high orbit, inclined 98.2 degrees to the equator. This means the OCO travels in the A-Train constellation on a fixed path over the same part of the Earth at the same time every day. Taking measurements at the same time every time is important in this mission because CO2 levels can vary based on time of the day and season. By maintaining t­his path, the satellite is able to observe and record carbon across the surface of the planet once every 16 days. The data is then translated into monthly maps of atmospheric CO2 based on 621-square-mile (1,609-square-kilometer) surface areas.

To measure and map carbon, the OCO is equipped with three high-resolution grating spectrometers, instruments that measure wavelengths of sunlight reflected off Earth in the presence of CO2 and molecular oxygen (O2. These instruments are able to identify carbon sources to an accuracy of 0.3 to 0.5 percent and within areas as small as 1 square mile (3 square kilometers) [source: Klotz].

Scientists monitor the annual mean growth rate of CO2­ as a way to understand how the planet's carbon budget has changed since the beginning of the industrial revolution. Recently, atmospheric CO2 has increased from 2.0 parts per million (ppm) between the years 2000 and 2007 to 2.2 ppm in 2007. From data collected by the instruments on board the OCO, scientists will have access to carbon concentration levels able to show variations of CO2 less than 1 ppm from the total atmospheric CO2­ concentrations, which increased to a massive 383 ppm in 2007 [source: Bruno].

­The onboard computer transmits all stored data to a gathering station in Alaska, where it's then sent to NASA's Goddard Space Flight Center for processing. We'll learn about the data and analysis next.