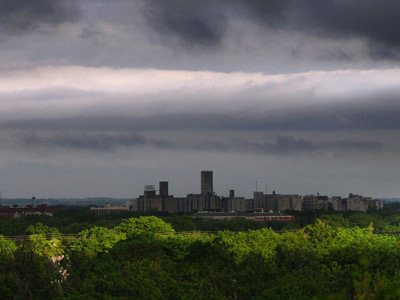 ­Scientists analyzing data from the OCO are located at numerous institutions but most of the analysis happens at NASA's Jet Propulsion Laboratory at the California Institute of Technology, which leads the OCO mission.

The maps of carbon collected by the observatory detail what gas types and concentrations are in the atmosphere. The information is then analyzed using global atmospheric chemical transport models for the locations of sources and sinks and their seasonal variance -- a modeling system similar to the kind used to predict weather patterns. Scientists translate this information about CO2 levels and distribution to better understand Earth's carbon cycle (human-generated and naturally occurring) and to forecast climate changes and estimate the effect on the planet.

With the data from the observatory, scientists will be able to explore numerous other studies: They'll get an in-depth look at the ocean carbon exchange, the way atmospheric gases mix across hemispheres, the way weather affects the exchange of CO2­ between different regions and the way fossil fuel plumes move across North America, Europe and Asia.

The data is also checked for accuracy, a process called ground truthing. The OCO project team works with scientists at the National Oceanic and Atmospheric Administration (NOAA) to be sure that the forests, land masses, water and gases detected by the instruments are there in reality. Ground measurements are compared with OCO measurements. But one of the most exciting methods for ground truthing will come with the launch of the $100-million White Knight Two, a high-altitude aircraft designed to fly up to 50,000 feet (80,500 kilometers), and the SpaceShipTwo, which will detach from the White Knight Two in flight and fly more than 60 miles (100 kilometers) above Earth. In comparison, large passenger planes fly at only about 7.5 miles (12 kilometers). Once ­it's ready to fly, the White Knight Two is scheduled to carry OCO-supporting experiments.

Learn more about NASA, satellites and global warming below.