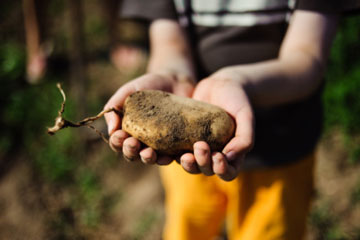 If you're not a serious devotee of organic foods, you might assume that the words "organic" and "insecticide" are mutually exclusive. But guess again. Even farmers who earn the U.S. Department of Agriculture's certified organic label, which requires them to adhere to a regimen of environmentally sustainable and health-conscious methods, are allowed some wiggle room to use certain synthetic chemicals and pesticides to control bugs, weeds and plant diseases. Basically, the exception kicks in when the preferred non-chemical methods, such as insect traps, crop rotation and hand-weeding, aren't sufficient to protect crops from destruction [source: USDA]. That said, the permitted artificial helpers usually aren't heavy-duty bug killers of the DDT ilk. Most of them are relatively mild substances. For example, take potassium bicarbonate. It's a manufactured chemical that's an effective fungicide against powdery mildew, but it doesn't cause any apparent long-term health problems for humans (even though it can interfere with reproduction in mice) [source: FDA].

Even so, a lot of hardcore organic farmers -- and do-it-yourself organic gardeners as well -- wouldn't even think of using anything artificial on their precious fruits and vegetables. Instead, if they feel the need to use a pesticide (or an insecticide, which is simply a type of pesticide that targets bugs), they turn to an assortment of natural substances. Some are gleaned from exotic foreign plants. For example, sabadilla is a bug repellant made from seeds of a South American lily, and Ryania, an antidote to European corn borers and harmful worms, is concocted from the ground stems and roots of a South American shrub. They also utilize more commonplace substances, such as a puree made from cornstarch and crushed tomato leaves -- it contains solanine, a chemical that has an inhibiting effect on black spot fungus [source: Abraham].

But are these organic bug and fungus fighters really effective? And more importantly, are they even safe? First, let's delve into the various types of organic insecticides.