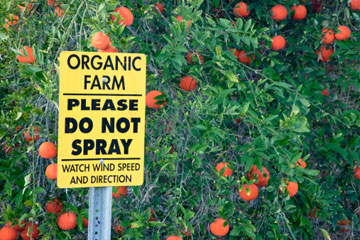 You might assume that insecticides are a recent development. But in truth, farmers have been using various substances to keep pests from ravaging their crops for thousands of years. In 2500 B.C., the Sumerians used sulfur to kill insects, and over the centuries, farmers in various parts of the world tried other sorts of chemical insecticides as well -- even substances like arsenic and lead that are highly dangerous to humans. Believe it or not, in the 1940s, the introduction of synthetic chemical insecticides was seen as a cure-all that would eradicate pests for good. But the pests proved remarkably resilient, and the powerful chemicals sometimes harmed other benign species and even people [source: McKinney, Schloch and Yonavjak]. That led many folks to reconsider older, less harsh methods -- and to try new substances gleaned from plants and soil in other parts of the world.

Basically, there are two broad classes of pesticides that can be used in organic farming, according to USDA regulations. In the first category are substances that are synthetic compounds not generally found in nature, but which have been deemed by scientists to be safe and non-threatening to both food consumers and the environment. These pesticides usually are simple compounds that include naturally occurring substances like copper or sulfur [source: Langois].

In the second category are naturally occurring substances, many of which are extracted from plants or from the earth itself [source: Langois]. One such organic pesticide is spinosad, which is produced by Saccharopolyspora spinosa, a rare species of bacteria that was found in soil samples from a Caribbean island in 1982. The bacteria basically act as tiny pesticide manufacturers, fermenting the soil and producing spinosad, which gives the soil a sweet, healthy aroma. But that smell can be deceptive -- at least if you're, say, a Colorado potato beetle or a caterpillar. When those bugs ingest spinosad, either by coming into direct contact with it or by eating a leaf sprayed with the chemical, it acts as a potent nerve poison. The creatures lose control of their muscles and helplessly die. While that grisly fate may seem a little, well, disturbing to some folks concerned with being kind to the Earth, it's important to remember that if those tiny freeloaders gobble up your vegetables, you're not going to have anything to put in your vegan stew. On the plus side, scientists have found that spinosad has very low toxicity in mammals, including humans, and that it doesn't seem to cause cancer or nervous system damage [source: Cornell University].

OK, so we understand where organic pesticides come from and how they work. But are they really better than the non-organic version, or at the least safer?