The Effectiveness of Organic Insecticides 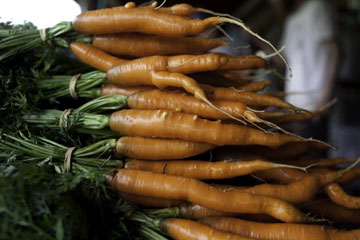 A pile of washed organic carrots waits to be refrigerated at the Clear Brook Organic Farm in Vermont.
Robert Nickelsberg/Getty Images

In most people's minds, the word "organic" is synonymous with words like "natural," "healthy" and "safe." And it's certainly appealing to think that something labeled "organic" works as well as or better than an artificial chemical concoction. But unfortunately that's not always the reality.

For one thing, some natural insecticides actually are very similar to synthetic ones produced in laboratories. One example is the potent natural poison pyrethrum, which is derived from the powered, dried flower heads of the pyrethrum daisy native to southwest Asia. Pyrethrum is very similar in structure to a class of synthetic insecticides called pyrethroids -- but unlike them, it's approved for use in organic cultivation. Pyrethrum is a fast-acting poison that disrupts insects' nervous systems and causes paralysis. In small quantities, pyrethrum may not be sufficiently potent to kill a bug, but when combined with other substances, such as nutmeg oil, it becomes much more effective. But how safe is it? The powder is relatively non-toxic for humans unless swallowed in substantial quantities. And it breaks down rapidly when exposed to the elements, so there's little chance of a buildup in food or water. But pyrethrum does have downsides; it's a hazard to fish like bluegill and lake trout, which is why organic farmers are encouraged to try other pest-control methods first before resorting to using it [source: Cornell University].

It's also important to remember that insecticides aren't the only way to protect crops from pests. Other non-chemical methods, such as crop rotation, not only have a history of decreasing damage from insects, but protect the soil's fertility as well [source: Peel]. So, if you're planning to grow organic foods, you might want to consider those methods first, and rely on insecticides as a last resort.