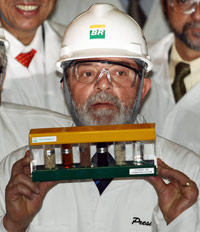 Brazil's president, Luiz Inacio Lula da Silva, holds up a sample of ethanol made from sugar cane, a biofuel -- one of the runners in our allegorical marathon.
Vanderlei Almeida/AFP/Getty Images

In February 2007, the U.S. Government Accountability Office published a stu­dy that examines the steps that would need to be taken in order to protect against a peak-oil fallout. The GAO concluded that there are a variety of factors that will ultimately influence the arrival of peak oil. Consider peak oil as a marathon, one where each of the runners' progress has an effect on the others. Each of the runners -- oil consumption, oil production and alternative fuel technology -- is involved in the oil peak, which we'll call a grim finish line.

In this race, oil production appears to have a tight lead over oil consumption. But remember, in this marathon, each of the runners' progress affects the others. So every time alternative energy sources have a burst of speed -- say, through some new advancement in biofuel technology -- oil consumption slows down.­ The same goes for another runner who is relatively new to the race: conservation. This runner can surge ahead, perhaps through new government regulation, which forces auto makers to increase the fuel efficiency of new cars. In the same way, this would slow down consumption and prolong the race.

­The opposite is true as well. Political instability in oil-rich countries could trip up production, causing it to fall behind. The huge economic development that has begun to characterize two of the world's most populous nations -- India and China, each with more than one billion people -- could give a boost to oil demand.

The way you look at the peak oil dilemma depends on which runner you bet on. Will alternative fuel sources overtake oil consumption? Or will increasing consumption simply be too much for the upstart to edge out? Will production get a sudden burst thanks to the discovery of a new oil field and leave the others in the dust? One way or another, the only guaranteed loser in this race will be production. It's how long this race will last that's up for discussion.

For peak-oil believers, the question is not whether oil production will decline while demand increases, but rather when the peak will take place. The Hubbert Curve of oil production can be extrapolated from individual wells all the way to worldwide production, and its creator, M. King Hubbert, has a history of accurate projections. In 1956, he predicted that the United States' production of oil would peak between 1965 and 1970. It peaked in 1971 and has been in decline ever since, closely following the curve Hubbert predicted [source: Dept. of Energy]. As a result, the United States imported about 58 percent of the petroleum it used in 2007 [source U.S. Energy Information Administration].

The U.S. isn't alone in this dilemma. The United Kingdom's North Sea oil production peaked in 1999. The decline in entire countries' production may alter the world production bell curve. Many believe we have already reached the peak of world oil production and have entered a plateau. This appears to have happened sometime in 2005, and is being dubbed by peak oil adherents as "peak lite."

But are peak-oil theorists simply overreacting? After all, no one can say for certain how much oil is left. Read the arguments against peak oil on the next page.­