What are the challenges of reducing solid waste?

Browse the article What are the challenges of reducing solid waste? 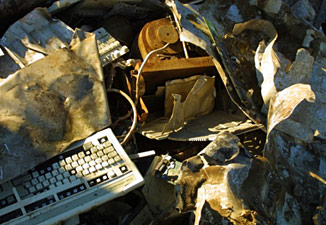 It might seem easy, but reducing solid waste is no small feet. Learn more. Check out these green pictures!
Photos.com/Thinkstock

If we lived in the Middle Ages, trash would be scattered and piled on the streets just outside our homes. Fortunately, we live in times that are much more civilized and sanitary. Our refuse is securely and tidily contained in garbage bags, canisters and dumpsters. Sanitation workers pick it up and ferry it off to be processed and sent to a landfill, where it will be buried underground. At that point for most of us, our garbage (defined by the U.S. Environmental Protection Agency, or EPA, as "solid waste") is out of sight and out of mind. But just because we don't think about our trash once it leaves our homes or offices, doesn't mean it doesn't continue to exist -- and build up.

In fact, solid waste in the United States is growing at a rapid rate. The EPA estimates that each American produces 4.6 pounds (2 kilograms) of garbage a day. In 1960, our daily rate of disposal was closer to 2.7 pounds (1.2 kilograms) of garbage per person a day. And the landfills where most of our trash ends up have been closing across the country -- usually either because they have filled up or they didn't meet federal safety standards. According to the Clean Air Council, there were 18,500 landfills in 1979. Keep America Beautiful, Inc. estimates that number shrank to 8,000 in 1988 and to 1,767 in 2002. Throughout the rest of the past decade, the number has stayed in that range.

Fortunately, this doesn't mean we're close to going back to Middle Ages-style trash storage. Today's landfills are larger and more efficiently managed, which is why we are able to survive with fewer of them. Responsible disposing, too, has made a dent in the amount of trash carted off to landfills. If you factor in activities like recycling and composting, the amount of garbage the average American sends to the landfill today is much closer to the 1960 statistic mentioned above.

Despite the advances in waste management made over the past several decades, there's no getting around the fact that we still have a lot of trash. And as the Earth's population grows, we have more and more garbage producers born every minute. Landfills, while considered practical for now, are not a desirable long-term solution for containing our solid waste because they pose the risk of possible land, air and water contamination.

So what can we do to reduce solid waste and send less of it to landfills? Recycling is an obvious solution, as it has already had an impact on trash reduction. However, there are a number of other ways we can cut back on solid waste. In fact, an entire science, known as garbology, has been devoted to that very goal. On the following pages, we'll look at these methods as well as the potential problems associated with them, so keep reading for more trash talk.

If you've been paying attention to -- well, anything -- for the past two decades, you've heard about recycling. It isn't a secret, and it's a great way to reduce solid waste because it gives new life to something that could be taking up space in a landfill for many years. And it couldn't be easier. Three easy ways to recycle are: buy recycled goods, reuse items whenever possible, and dispose of recyclable items in recycle bins.

When it comes to the reusing part of recycling, there are many non-wasteful options, such as using your own reusable shopping bags. But even if you carry home your groceries in a plastic sack, you can reuse it before surrendering it to the recycle bin. For example, you can use it as a trashcan liner, saving yourself a garbage bag. Or, if you have scrap paper lying around your office, you can reuse it by printing on the blank sides.

Another form of recycling is composting. A large percentage of trash we accumulate, such as food scraps and lawn clippings, is organic and biodegrades quickly. When these types of trash are composted, they can be reused as fertilizer.

And, of course, there's the trusty recycle bin handy when you're not able to reuse or compost your trash. Before you know it, that can that contained your afternoon caffeine pick-me-up will be made into a new soda can instead of whiling away the next several centuries in a landfill. (Yes, you read that right ... "centuries.")

Recycling goes a long way in reducing solid waste, but it's not the only way. Keep reading to learn about other methods.

At this point, recycling may seem like a no-brainer. We've all heard about it, and we know it reduces solid waste. However, it is only one element of trash reduction. There are additional things that you, an average citizen, can do to reduce waste. And, there are options that scientists and waste management experts are pursuing.

If you look at our trash problem as a disease, recycling is an antidote, but a method called source reduction is a vaccine. It seeks to keep waste from occurring in the first place. Garbage will always exist, but it can be reduced. An important target of source reduction is packaging.

As a consumer, you can help reduce the waste associated with packaging in several ways. When you're ordering several items, request to have them sent in one shipment rather than multiple shipments. If you're buying off store shelves, look for unpackaged items. And consider buying in bulk. By buying many or larger items packaged together, you can cut back on the multiple packages associated with frequent buying.

Source reduction is something fairly easy and common that any of us can engage in to reduce solid waste, but garbage experts have a more complex way of getting rid of garbage: combustion. With this method, cities, counties or private contractors will incinerate garbage in a controlled burn. According to the EPA, around 12 percent of our garbage is handled in this manner. And, many of the incinerators that burn trash are run by refuse-derived fuel. Landfills create greenhouse gasses (primarily methane) that can be trapped and used as fuel. These gasses can also be sold to other industries as a "greener" source of energy.

But scientists are working on something much more spectacular than ordinary combustion: plasma blasting. In this method, garbage is vaporized by a plasma torch. Plasma is a collection of charged particles that can blaze garbage at temperatures as high as 10,000 degrees Fahrenheit (5,537 degrees Celsius), turning organic trash into vapor or melting inorganic trash into solid, rock-like materials. Not only does it generate fewer emissions than incineration because of the high temperatures it produces and the resulting disassociation of organic compounds it causes, but it also creates a synthetic gas that can be harnessed and used as an energy source. In addition, post-plasma melted garbage can be used as construction materials. The first U.S. plasma refuse plant is expected to open in Florida in late 2010. There are already two in operation in Japan.

If reducing our solid waste were as simple as just recycling or source reduction, our garbage problem would be more easily solved. Unfortunately, there are obstacles to these methods of solid waste reduction. Let's start with the one most likely to cause a setback: costs.

Recycling, while beneficial in solid waste reduction, is not cheap. Additional labor, transport and production go into recycling, costing cities and waste management companies money. As a result, recycled products often cost more to consumers. And companies that use recycled materials in product packaging must pay more as well -- either absorbing the cost or passing it along to the consumer in the price of its products.

There are also other incidental costs along the way for consumers. For example, the price of buying reusable grocery bags versus the free plastic bags you receive in the store. Or, the extra cost of buying bulk items for reduced packaging when standard-packaged items may be more budget friendly.

On the other hand, the reusing side of recycling can actually be cost-efficient. Just ask your Depression-era grandparents some of the tricks they used to make their money go farther in hard times, and the answers you'll get will sound a lot like reuse tips for solid waste reduction: reusing products for multiple purposes, extending the life of products you use and sharing goods with others. When times are difficult, reuse can actually help save you money. The flip side of this is that when many people start purchasing less, jobs can be lost.

Another area of concern when it comes to solid waste reduction is the possible increase in pollution created by recycling. Recycling generates pollution because more vehicles must be employed in collecting recyclables and transporting them. Then, additional pollution can be created by factories that recycle trash into raw materials. Of course landfills, where the trash might otherwise end up, can create pollution as well.

Reducing solid waste can lead to as many potential unintended consequences as managing it. Good can come from landfills in the form of "green" energy, and bad can come from recycling in the form of increased costs and pollution. Ultimately, you have to weigh the good and bad to find practices that you think are best for you and your community. Just keep in mind that as you take your time to decide, that Styrofoam cup you just threw away is settling in for the next several decades.