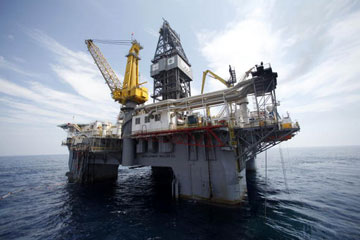 The Development Driller III drills a relief well off the coast of Louisiana in the Gulf of Mexico in May 2010 to combat the oil leak. See more oil field pictures.
Getty Images News/Getty Images

Ever wonder how old-timey oil wells you see on television had enough pressure to erupt geyser-style, spewing "black gold" hither and yon? Turns out this big screen wonder can happen in real life. Oil deposits are sealed under weighty layers of soil and rock, but when a drill breaks the seal, all that pressurized liquid needs somewhere to go. Usually, it flows up and out of a well in a controlled manner. That's because modern wells have blowout preventers -- a series of shut-off valves and a master kill-switch -- that usually limit such overflow eruptions [source: American Petroleum Institute]. But when something goes catastrophically wrong -- like the Transocean offshore oil rig, Deepwater Horizon, that exploded on April 20, 2010, killing 11 workers and sending oil flowing unchecked into the Gulf of Mexico -- a relief well may be the best option to bring it under control.

A relief well comes into play when a well goes wild, channeling more oil or natural gas than the well or its operators can handle. To tame the flow, a secondary well is dug at a safe distance from the original drilling site, tapping into the troubled piping and diverting the pressurized liquid [source: SWPLA]. However, in the case of the Deepwater Horizon incident, the relief well started May 2, 2010, was intended to plug the oil-gusher by pumping saltwater, mud and concrete into the far-underground pipe from which the blowing well is spewing oil. The effort is expected to clog the out-of-control well, but just in case the first relief well misses its mark, BP (the company that had hired the Deepwater Horizon to drill the main well) began drilling a second relief well May 16, 2010 [source: O'Hanlon]. Unfortunately, the odds of drilling into exactly the right spot are slim; it's like aiming for a dinner plate 3 miles (5 kilometers) below the sea's surface [source: Brown].

Other than the fact that relief wells generally are drilled to hit a precise target, there's not much difference between them and regular wells. Both are drilled vertically downward, but the relief well also angles to intersect with the original well; this is called directional drilling [source: Fountain].

Relief wells aren't just a "plan B" for oil or natural gas drilling. In areas with high water tables, relief wells are dug just as normal water wells would be, then used to periodically drain excess water. For example, a system of relief wells surrounding a levee can help stabilize the structure over the long-term by containing the water [source: Cashman].

But pre-emptive drilling for relief oil wells doesn't usually happen at the same time main wells are being constructed, even though it's the only method proven to stop a blowout if containment methods don't work [source: Drash]. In fact, in the United States, relief wells aren't mandated [source: Bluestein and Drearen]. Unfortunately, as we'll see on the next page, drilling a relief well after the fact is like calling 911 to report a house fire and learning the fire engine needs to be constructed before it can race over to douse the flames.

What a Relief: History of Relief Wells

Relief wells have been used since the early 1900s, nearly as long as machines have been tapping underground fossil fuels. Initially, relief wells were drilled vertically near a blowing well and used only to divert pressure from the well. Drilling techniques remained largely unchanged until 1933, when an angled -- or directional -- relief well was used in Texas. Not only did this relief well tap into the oil reservoir below a spouting well, but it also was used to kill the well by pumping water into its original source [source: Wright and Flak].

More improvements came in the 1970s and 1980s, when for the first time a relief well intersected with the underground pipe of a blowing well, thanks to improved detection methods. The era also introduced steerable directional drilling equipment and the use of fluids heavier than oil -- such as synthetic materials or natural materials including guar gum or mud -- to kill gushing wells [source: Wright and Flak]. Today, basic relief well techniques are still not much different from those used in 1933, although sophisticated drilling and detection equipment increase the odds that a relief well will hit its target -- whether that's a 6-inch (15-centimeter) diameter pipe or an underground reservoir [source: Spear]. The relief well either intercepts the original well's piping or taps into the reservoir from which the original well is pulling. It all depends on a rather complicated rubric that factors in, among other things, the probability of a well kill [source: Wright and Flak].

Most of the time, water relief wells are drilled as a precaution. When it comes to oil, some advocates recommend taking the same approach by drilling oil relief wells and regular wells simultaneously [source: Drash]. It's an idea that many experts say seems worth considering since relief wells often take two or three months to drill, depending on the depth of their location [source: Rubin]. In fact, a relief well may be finished long after the damage from a blowing well is done.

So, how exactly does a team of workers put a relief well into place? We'll explain it, step-by-step, on the next page.

Cost of a Relief Well

Drilling a relief well to divert an out-of-control oil well may be expensive, but not as costly as widespread clean-up efforts -- to the environment or a company's image. In fact, early predictions estimated the clean-up costs and related expenses for the 2010 Gulf of Mexico oil leak would cost at least $12.5 billion [source: Haq]. As of June 10, 2010, the total drilling cost of dual relief wells alone was estimated at $200 million [source: Fountain]. 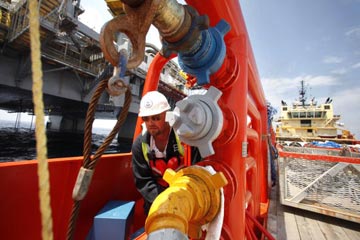 A worker turns a valve to transfer fuel to the equipment drilling a relief well in the Gulf of Mexico in May 2010.
Getty Images News/Getty Images

A relief well is nearly identical to a regular well. In fact, a relief is drilled using the same equipment that's used to drill a regular well. The main difference is that, in the case of oil or natural gas relief wells, the vertical shaft is eventually drilled at an angle to intersect with the original well's pipe. But, if you're picturing a relief well going in right next to a blowout well, it's time to reframe. In reality, a relief well must be placed at a safe distance from the original well. For example, in the 2010 Gulf of Mexico oil leak, workers began drilling the first relief well about half a mile (800 meters) from the well that was gushing oil [source: BP]. Then there's the challenge of using a 1-foot (30 centimeter) wellbore to drill into earth monitored by remote mapping equipment, hoping to hit a pipe of similar diameter [source: Mowbry].

To begin, workers use a steel drill bit attached to a hollow steel pipe to delve through geographic layers [source: Bluestein and Drearen]. The drill bit is replaced several times throughout the process because it tends to dull with use; the steel pipe helps keep the drilled hole from collapsing and is later replaced by a permanent version. When it's time for the drill bit to change direction so it can intersect with the original well piping, a pipe joint is attached that causes the drill to angle -- but only to a gentle 5 degrees. As the drill reaches its target depth, the well will be "set," which means permanent tubing will be lowered into the hole and cemented [source: Earth Science Australia]. Then, as the drill bit nears the original pipe, it will be replaced with a diamond bit that can cut through the main well's existing pipe [source: Tasker].

The idea is that once the pipes intersect, the relief well can be used to do one of two things: divert the flow from the original well or block it by delivering synthetic or natural additives, such as mud, concrete or guar gum filler.

Once a drill hits its target -- whether its water, oil or natural gas -- what happens next? If you're wondering how water or fossil fuels are piped out of the ground, check out the next page.

Parts of a Back-up System: Relief Wells in Detail

The parts of a relief well -- steel piping, steel or diamond drill bits and bent pipe joints used to angle the drill's direction -- do all the behind-the-scenes work during boring. Above ground, there's another set of tools at work.

When the relief well is complete, it could be used to continue producing oil from the site [source: Hargreaves]. If this is the case, a pump jack will be installed at ground level. The pump jack moves oil or gas out of the ground through the drilled hole by using a series of weights, valves and a sucker rod [source: National Science Foundation]. You can read more about it in How Oil Drilling Works. Similar pumping equipment, although on a smaller scale, can be used to operate water relief wells. More often, however, water wells are driven by a modern version of the pump jack: a jet pump.

Most water relief well jet pumps contain a few standard features, including a well casing and filter; the well casing lines the pump hole and the filter prevents anything other than water from entering the pump. The water is pumped according to signals from a pressure switch mounted near a motor above ground. If the pressure hits a designated level, the pump will cycle water from the well up through the pipes and into a storage tank or into a series of drainage pipes.

Whether relief wells are controlling water or oil, they all have one thing in common after a pump is put into place: Routine maintenance and natural disaster aside, most don't require that much attention. In fact, many producing wells are operated by remote. Instruments take on-site output measurements and transmit the data to a central off-site location where it is processed and monitored [source: DeFlow]. Of course, if the relief well's only job is to deliver heavy materials, such as mud or concrete, and "kill" an out-of-control catastrophe, its role will be short-lived and it, too, will be closed.

Read on to the next page to learn more about oil drilling and wells.