Browse the article Rising Sea Levels Mean These U.S. Cities Should Prep for Millions of Migrants 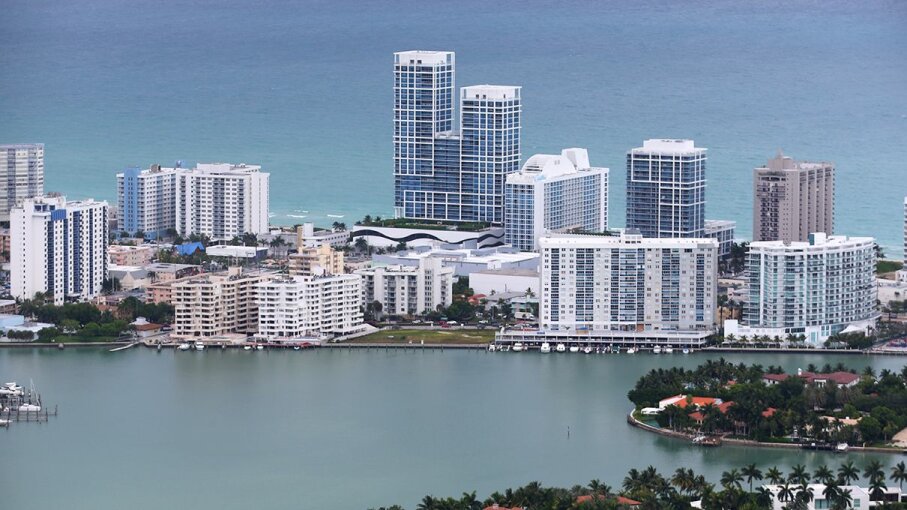 Waterfront condos in Miami house thousands of residents; what cities will they move to when rising sea levels force their displacement? Joe Raedle/Getty Images

Hurricane Katrina, which famously laid waste to coastal areas in the Southern United States, was one of the five deadliest hurricanes in the history of the nation. The 2005 hurricane was also one of the costliest, racking up $108 billion in damage to homes, businesses and city infrastructure — most dramatically in New Orleans and other low-lying Louisiana areas — and causing thousands of displaced people to migrate inland.

Although this may seem like a relatively isolated scenario, there's a lurking environmental issue that could create an inland exodus all over again: rising sea levels.

A 2017 University of Georgia study published as a letter in the journal Nature Climate Change purports as many as 13.1 million people in the United States could be displaced by high water, creating a population boom in municipalities like Atlanta and Orlando, the latter of which could receive 250,000 new residents. Inland Texas cities, in particular, would gain the most migrants as people move from coastal areas like Houston. Researchers predict the populations of the Austin-Round Rock region could grow by as much as 820,000.

According to NASA, which monitors sea levels via satellite, sea levels have risen 3.7 inches (9.5 centimeters) since 1993 and continue to rise about one-tenth of an inch (0.4 millimeters) each year, a rate only expected to increase. What's more, a whopping 40 percent of the U.S. population lives in coastal areas, where rising sea levels lead to increased flooding, shoreline erosion and additional hazards when storms hit. Overall, flooding in U.S. coastal communities has increased 300 to 900 percent in the last 50 years. Many of the world's largest cities — Osaka, Japan, Guangzhou, China and Mumbai, India, for instance — are also at risk because of their near-coastal locations.

Many studies have looked at the rise of sea level or looked at the impact to people who live in coastal areas, but this UGA research is one of the first to consider not only the impact on the locations people would be leaving, but also the strain a large population migration could have on the inland cities that people move to.

"We typically think about sea level rise as a coastal issue, but if people are forced to move because their houses become inundated, the migration could affect many landlocked communities as well," says Mathew Hauer, the study's lead author, in a press release.

A vehicle drives through flooded streets caused by the combination of the lunar orbit which caused seasonal high tides and what many believe is the rising sea levels due to climate change on September 30, 2015, in Fort Lauderdale, Florida.
Joe Raedle/Getty Images

Hauer adds that the connections between environmental changes and migration are complex, and can include both short-term and permanent relocation. To create the population models, the researchers estimated the number of people at risk from rising sea levels, then simulated their potential inland destinations throughout the remainder of the 21st century. The study is, in effect, a colossal heads-up for municipalities that may receive tens of thousands of rising seawater refugees.

Based on the study's forecast, policy makers will need to channel funding into critical infrastructure necessary to accommodate population growth. City leaders also will need to address the challenges with existing resources in preparation for growing numbers.

Rising sea levels will likely lead to changes in city planning, including everything from long-range growth strategy and building codes to more onerous responsibilities for businesses and building owners.

"Some of the anticipated landlocked destinations, such as Las Vegas, Atlanta and Riverside, California, already struggle with water management or growth management challenges," Hauer said. "Incorporating accommodation strategies in strategic long-range planning could help alleviate the potential future intensification of these challenges."

As inland cities grapple with the strain of population growth — wastewater systems, street maintenance, residential housing and increased need for city services — coastal cities also are being reshaped. Researchers estimate many coastal cities in the U.S. will be at least partially underwater by the year 2100, something Paladino says will lead to "climate resilience strategies."

"Sustainability is the act of ensuring the ability to continue, through stewardship of human, financial, and ecological capital. Resiliency, on the other hand, is ensuring that the capital base does not fail catastrophically and continues to perform at a net positive rate, even during wild weather events," says Paladino, who also served on the U.S. Green Building Council. "Climate resilience strategies allow waterfront buildings to flood without damaging major equipment, and to continue operations when the power goes out. Resilience planning allows communities and businesses to bounce back after events."

If climate forecasts hold true and coastal cities experience more instances of flooding — or become partially submerged — it may be city planners hundreds of miles away who come to the rescue.

Atlanta will be one of the inland U.S. cities most affected by domestic climate migrants, a 2017 study finds, and should plan its infrastructure development accordingly.
Erik S. Lesser/Getty Images
Now That's Cool
To learn more about past changes in Earth's climate, scientists extract ice cores from ice sheets in Antarctica and Greenland, which contain 99 percent of the world's fresh and frozen water. The layers of snow and ice have gases, dust and water molecules that offer clues to at least the last million years.