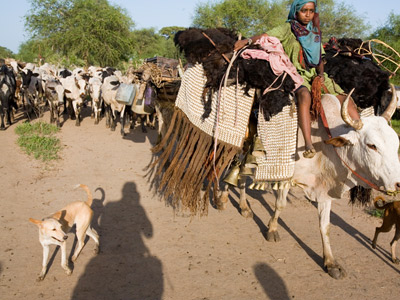 Nomads in Chad migrate with the rains that grow grass for cattle.
Michael Nichols/National Geographic/Getty Images

­Most of us are famili­ar­ with the stark, sandy Sahara Desert for an unlikely reason: We've seen it in the movies. When George Lucas needed a location for Tatooine in his movie "Star Wars," he chose -- and showed us -- the landscape of southern Tunisia in Africa.

Travel south from Tunisia to the edge of the Sahara and you'll come across a belt of semiarid grassland and desert. This is the Sahel, which means "shore" in Arabic, likely referring to the sea of sand it borders. To the south of the Sahel are the rainforests of central Africa and to the east and west are the Atlantic Ocean and the Red Sea. The Sahel spans roughly 1.1 million square miles (3 million square kilometers) and includes the nine countries of Burkina Faso, Chad, the Gambia, Guinea-Bissau, Mali, Mauritania, Niger, Senegal and Sudan.

­The Sahel region is home to more than 50 million people and is one of the poorest areas in the world. The annual per capita gross domestic products (GDP) of the countries of the Sahel ranges only from $200 to $700 [source: GlobalSecurity.org]. Available utilities such as electricity, running water and trash collection are sporadic; open sewers are widespread. The people there depend on agriculture and pastoralism, or putting animals to pasture, for their survival. Some are nomadic cattle herders, but most are subsistence farmers growing sorghum, cotton, millet and other dryland yields.

In addition to devastating poverty, the people of the Sahel also face an unstable climate, and drought is no stranger. Massive droughts struck the region throughout the 20th century, bringing famine, shortages of natural resources and political unrest that has yet to be resolved. During the second half of the 20­th century, and especially the years between 1972 and 1984, the Sahelian zone experienced its worst drought on record, killing more than 100,000 people and leaving more than 750,000 in need of food aid [source: UNEP].

­Scientists find it challenging to uncover reasons behind the droughts. Let's look at their recent theories and the long-term effects on the region, including why the Sahel is shifting. 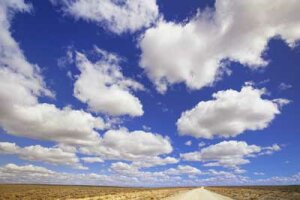