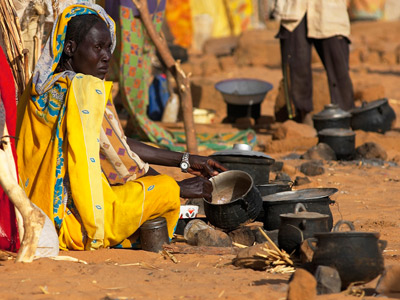 The harsh environmental conditions of the Sahel contribute to the region's strife: A woman who fled fighting prepares tea at a shelter in North Darfur, Sudan.
Jacob Silberberg/Getty Images

The boundaries of the Sahel are shifting. It appears the Sahara desert is expanding southward and infringing on the Sahel, and it's estimated that more than 80 percent of the land is affected by the shift [source: IRIN].

Just south of the Sahel region is the northernmost edge of Africa's tropical rainforests, as well as a rain belt that fluctuates naturally north and south with the seasons. Repositioning the rain belt farther north would bring rains and vegetation into the Sahel and the Sahara desert; move it south and the Sahel becomes a desert.

Previous to the ocean-temperature theory, human behaviors were blamed for the region's drought. Humans aren't off the hook, though. Overgrazing, overfarming, overpopulation and unsustainable uses of natural resources all contribute to the land degradation that, in turn, contributes to the drying of the Sahel. It's a vicious cycle: Vegetation may play a role in rainfall amounts, but without rainfall, there is no vegetation.

Overpopulation in the Sahel continues to be a problem and is estimated to double to 100 million people by 2020 and swell to 200 million by 2050 [source: IRIN]. The humanitarian implications of changes to the Sahel are devastating and include hunger, disease and hostility. The World Health Organization (WHO) predicts that outbreaks of dengue fever and cholera will rise along with the temperatures [source: IRIN]. Workers are migrating from the dried-up countryside into urban areas, overtaxing utilities and worsening crime levels.

The scarcity of food and natural resources such as water, grass for grazing and soil is heightening competition and demand. There is a profusion of small arms and weapons in the region and tensions are growing between ethnic groups, as well as between settled farmers and nomadic herders in Chad, Mali, Niger, Nigeria, Senegal and the ­Sudan. Niger, for example, is forcing out the Mahamid nomadic peoples. The violence in the Sudan is even more intense than that of Niger and has killed at least 200,000 people and led to more than 2 million refugees [source: National Geographic].

Solutions for inhibiting social, economic and political unrest and strategies for "greening" the Sahel are of great importance in re-establishing the region. Global agencies provide not only food and financial aid to the region, but also assistance for programs supporting education, conflict management and infrastructure projects such as the construction of schools.

Additionally, sustainable agricultural practices and soil and water conservation programs are key for rehabilitating the region's fragile ecosystem. Niger, for example, is lusher with vegetation than it was 20 years ago, yet no one can agree why. Increased rainfall? Maybe. But the rejuvenated vegetation could also be the result of people fleeing the countryside during conflict or even the small, sustainable steps local farmers have taken to safeguard their resources. Rather than clear-cutting fields for planting, farmers are preserving gao trees and saplings by plowing around them. These trees are nitrogen-fixers, meaning they're rich with the nutrient. They also hold soil in place and keep water in the ground, and the nitrogen creates more fertile soil as well.

­Progress can grow beyond Niger. Through ongoing climate research, transformative land practices and aid programs, countries in the Sahel may not need to face a future of drought and instability.