Browse the article What if Bicycles Could Clean the Polluted Air Around Them? 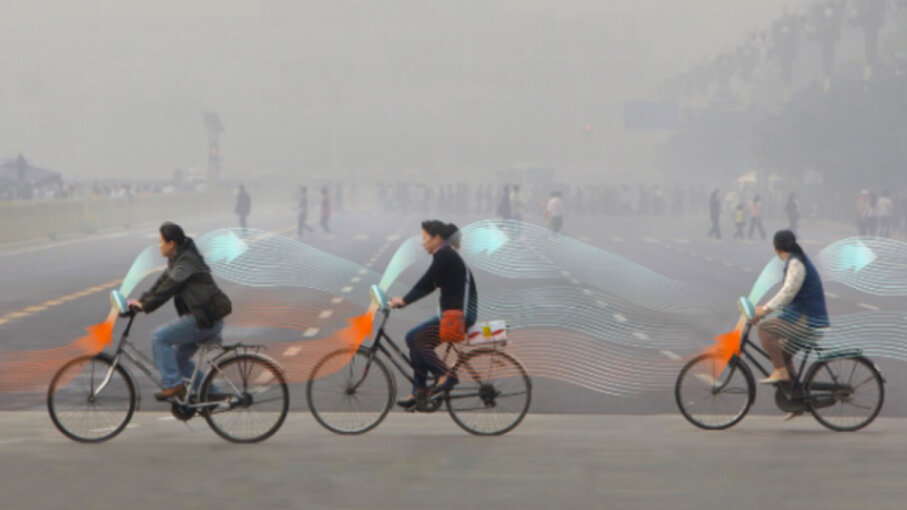 Innovative Dutch artist Daan Roosegaarde and his team of designers and engineers at Studio Roosegaarde are out to make the world a more sustainable, livable place. "We need to work together to make cities better for humans again," he says on his website.

Part of that vision is the Smog Free Project, which aims to show how we could use technology to remove air pollution from urban environments. His first step, funded in part by a Kickstarter campaign that raised about $127,000, was to build a structure called Smog Free Tower in a public park in Tianjin, China. The device sucks in the surrounding air and then uses an ionization process to remove particles from it, which it then expels through horizontal vents in its sides. Imagine a giant vacuum cleaner, and you've got the basic idea. Eindhoven University of Technology recently measured the 7-meter (22.9-foot) tower's air-cleansing effectiveness, and found that it captures nearly 50 percent of particles in the 20 meters (65.6 feet) of ground-level space around it.

Now Roosegaarde has come up with another, even more imaginative concept — the Smog Free Bicycle, which will use a smaller version of the same technology to remove pollution particles from the air around a cyclist.

"Bikes have always been a symbol of energy-friendly and congestion-reducing living, but this bike serves a double function by cleaning the air as you cycle," Roosegaarde told the Guardian when discussing his concept.

Roosegaarde said he hopes to see smog-scrubbing bikes eventually adopted by the bike-sharing services that are becoming increasingly popular in China and elsewhere around the globe.

A man wearing a breathe mask rides the bicycle in the heavy smog in late 2016 in Beijing, China.
VCG/Getty Images
Now, That's Interesting
Roosegaarde also has created a solar-powered bike path whose photoluminescent pebbles are laid out to form the swirl in Vincent van Gogh's "The Starry Night."