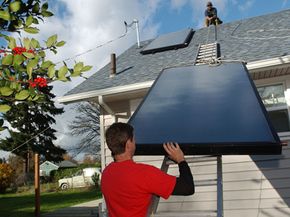 The owner of a solar energy company installs panels for a hot water system in Oregon.
Melanie Conner/Getty Images

Just about everyone wants to reduce his or her carbon footprint. Yet we've also grown attached to our computers, hot tubs and big-screen TVs, all of which require a lot of energy.

Solar power is a clean, renewable energy source, yet it makes up less than 1 percent of the power used in the United States [source: USA Today]. Part of the reason more people aren't using solar energy to power their homes is the cost. Solar panels can cost $30,000 or more to install, an investment that can take 10 to 15 years to recoup [sources: Live Science, CNET News, Walsh]. As Ed Begley asked in an ad for the solar energy company, Citizenre, "If the mobile-phone industry required you to invest $10,000 to get your wireless service, and it was your responsibility to maintain and repair the network, would you have a cell phone?" [source: New York Times].

­Maintaining solar panels is relatively easy, but it is your job. Depending on the system you have installed, you can expect to spend an entire day or two a year cleaning and caring for your solar panels [source: CalFinder].

There is also the issue of energy production. Unless you live in California or another sunny climate, solar energy alone may not be enough to meet your household's entire energy needs, meaning that you'll still have to pay to pull some of your electricity from the regular grid [source: Mother Earth News].

The government has tried to ease the cost of owning solar panels by offering tax breaks, rebates and low-interest loans to help pay for installation. The federal government is offering a tax credit equal to 30 percent of the total cost of any solar panel systems put into service between Jan.1, 2006, and Dec. 31, 2016. California residents can write off an additional $3,000 to $6,000 as part of Gov. Schwarzenegger's­ 10-year, $3.3 billion program to put solar panels on 1 million California roofs by 2016. States such as New Jersey, Colorado and Maryland offer rebates of up to 70 percent of the cost of solar panel installation.

Homes that are highly energy efficient and produce more solar energy than they can use get another perk. They can put that extra energy into the electric grid. In return, they may get a credit toward future bills from their local electric company.

­If you want all the benefits of solar power without the high up-front costs, several companies are offering a cheaper alternative to buying the panels yourself. 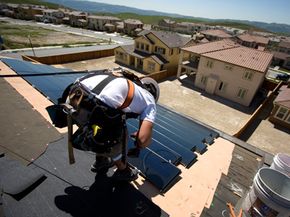 Solar panels no longer have to be the homeowner's responsibility.
Robert Nickelsberg/Getty Images

Instead of putting up $30,000 or more to buy solar panels, why not just rent them? A few companies are offering to install and maintain solar panels in exchange for a monthly fee. The idea is based on the purchase power agreements used by businesses. In this type of agreement, the company owns and maintains the solar panels and sells the electricity back to the homeowner. At the end of the rental period, homeowners can extend their lease, buy the system, or have it removed. The arrangement protects homeowners from rising fuel prices because their monthly cost is locked-in for several years. Because the rental company owns the panels, it gets to take advantage of government rebates and tax breaks instead of the homeowner.

How exactly the rental agreement works depends on the company involved. SolarCity, which serves residents of California, Oregon and Arizona, charges $1,000 to $3,000 (depending on the size of the system) to install the solar panels, and then charges the homeowner a monthly fee. For example, if a homeowner has a monthly electricity bill of $250, he or she might pay SolarCity $125 a month to rent the solar panels, but the homeowner's electricity costs would drop to $100. All in all, he or she would be saving $25 a month by renting solar panels [source: SolarCity].

­Sun Run, a San Francisco-based company, has a couple of different plans. With the Total Solar plan, homeowners pay a big up-front cost, but they don't have any monthly electric bills. The company's Power Plan charges customers $2,000 to $8,000 up front, but then they have to pay a monthly power bill.

Citizenre, which is based in Delaware, eliminates the opening investment entirely. The only fee it charges is a $500 security deposit. For the duration of the contract, which can be 1, 5 or 25 years, customers just pay a fee per kilowatt-hour of energy they use.

Other companies are also in the business of renting solar energy. These include freEner-g in Minnesota, CT Solar Lease in Connecticut and Recurrent Energy in California.

­Meanwhile, a few companies are developing new technologies that should bring the price of solar panel ownership down for consumers. Companies such as Akeena Solar are streamlining systems to make them easier to install. SUNRGI, which is based in the Silicon Valley, has developed much smaller solar panel technology that it says can produce as much electricity as regular-sized panels.

Mike Strizki's New Jersey home has 3,500 square feet (325 square meters) of space, a hot tub and a big-screen TV. How much does Strizki pay to power this big home? Absolutely nothing since he owns the first solar-hydrogen powered home in the country. Here's how it works: Solar panels on the roof generate electricity. Whatever energy the home doesn't use powers a device called an electrolyzer, which breaks down water in a tank into its components -- hydrogen and oxygen. The oxygen is released into the air, while the hydrogen is stored in tanks. On cloudy days, that hydrogen is used to power the house. Great idea, but with a set-up cost of $500,000, this solar system is way too pricey to be practical for the average consumer. 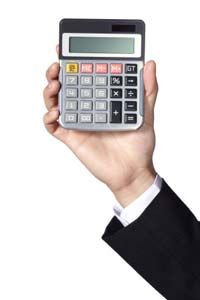 Up Next
How Solar Cells Work
Explore More 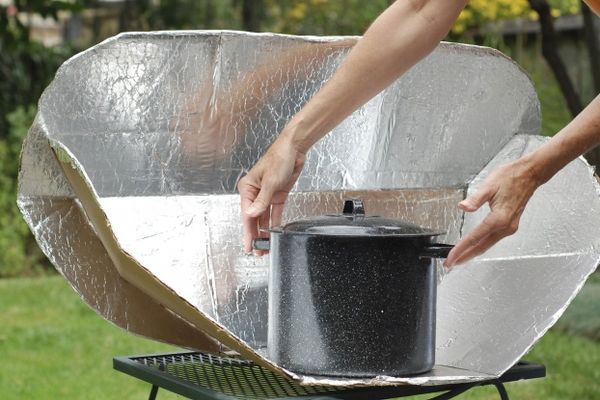 You May Like
How Solar Cooking Works
Explore More