How is the U.S. promoting clean energy research? 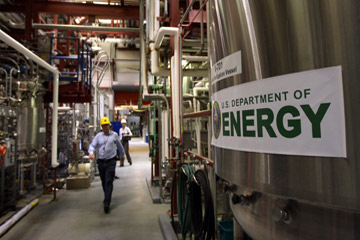 In June 2010, U.S. President Barack Obama cited clean energy as the catalyst of economic recovery in the United States. "As we recover from this recession," said the president, "the transition to clean energy has the potential to grow our economy and create millions of jobs -- but only if we accelerate that transition" [source: The White House]. And in his January 2011 State of the Union address, he set the goal of generating 80 percent of the nation's electricity from clean energy by 2035 [source: Union of Concerned Scientists].

When President Obama talks about clean energy, he is referring to electricity and automotive fuel derived from largely renewable sources like solar, wind and fuel cells. The White House believes that investment in clean energy research and development is not only critical to America's economic competitiveness, but our national security. Dependence on foreign energy sources, particularly oil, means that our energy and fuel reserves are under constant threat from politically unstable regions and regimes. And over-reliance on fossil fuels only increases the economic, health and security issues associated with global climate change.

For the White House to achieve its vision of an America powered by clean energy, it is working closely with the Department of Energy (DOE) to fund private and public research initiatives that support the DOE's core clean energy programs:

The government agency that most directly promotes and invests in clean energy research is the Office of Energy Efficiency and Renewable Energy (EERE) within the DOE. One of the main roles of the EERE is to create public/private partnerships that bring "clean, reliable and affordable energy technologies to the marketplace" [source: EERE]. For example, the office recently allocated $112.5 million in research grants to reduce the total cost of solar energy production by 75 percent, thereby making it competitive with cheaper sources of electricity like coal [source: EERE].

At $35 billion in clean energy investments in 2010, the United States government outpaced all but two countries (China and Germany) in the race to create the greenest economy [source: Pew Charitable Trusts]. Learn more about government funding for clean energy research on the next page.

The greatest economic boon to clean energy research in America came with the passing of the American Recovery and Reinvestment Act of 2009. When the bill became law, it made $275 billion available for federal contracts, grants and loans [source: Recovery.gov]. Of that money, $16.8 billion was allocated to the Office of Energy Efficiency and Renewable Energy (EERE) to fund its core initiatives, including seven programs listed under the umbrella of "renewable energy projects." They were:

Each of these renewable energy programs has already invested or allocated hundreds of millions of dollars in federal funding to support private and public sector research. The recipients of the grant money are often public/private consortiums composed of universities, private corporations, and nonprofit research institutes. By giving money to a consortium, the federal government can tap the brightest minds working across the broader scientific community. Here are a few funding examples:

The primary government funding method for investing in clean energy is through competitive grants. Under this process, the government announces a grant opportunity and sets a window for submitting grant applications through Grants.gov. The money is then allocated to the best grant proposals. In some cases, federal money is invested through a cooperative research and development agreement (CRADA), a partnership between a private company and a government-sponsored national research laboratory. In the case of a CRADA, the "funding" is the labor and resources provided by the national laboratory to help speed a new technology to the marketplace.

An example of one of these government-sponsored laboratories is the National Renewable Energy Laboratory (NREL), which works in concert with the EERE on its seven core programs. For example, there is a research arm of the NREL called the National Wind Technology Center that supports private sector development of more efficient wind power technology and infrastructure.

With so much support from the federal government, it's an excellent time to be in the clean energy business. In 2010, global investment in clean energy research was up 30 percent from 2009 at a total of $243 billion.

For lots more information on green technology and alternative energy sources, follow the links on the next page.