Are personal watercraft destroying the planet? 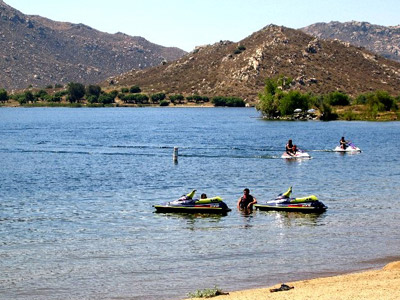 In 1989, the Exxon Valdez oil tanker ran aground in Alaska, resulting in one of the biggest environmental disasters in history. The tanker spilled nearly 11 million gallons (almost 42 million liters) of oil and gas into Prince William Sound, devastating wildlife and ecosystems [source: EOE]. If you multiply that number by 15, you get the amount of oil and gas dumped into bodies of water each year by personal watercraft [source: CO Parks].

Personal watercraft, also known by the brand names Jet Ski, WaveRunner and Sea-Doo, are pretty much what they sound like: single (or sometimes double) occupancy boats. But instead of sitting inside them, you stand or sit on top of them while you drive around on the water at up to 65 miles per hour [source: BWN]. The craft are banned in most state parks, and other recreation areas have strict regulations regarding their use -- regulations not applied to other types of watercraft.

The special rules for personal watercraft, or PWC, mostly have to do with the excessive fuel dumping that has been polluting lakes and waterways for decades. Environmental organizations, supported by a large percentage of the public, have sued government agencies for not limiting PWC use on public lands -- and they've won.

The confusing thing is, boats dump similar amounts of fuel. So why just restrict PWC? Why all the lawsuits and public outrage directed at PWC instead of all motorized watercraft?

In this article, we'll look at the particular environmental issues surrounding personal watercraft, and we'll find out if they're really doing as much damage as many people believe. We'll also find out what's being done about the problem, both by recreation areas and by PWC manufacturers. 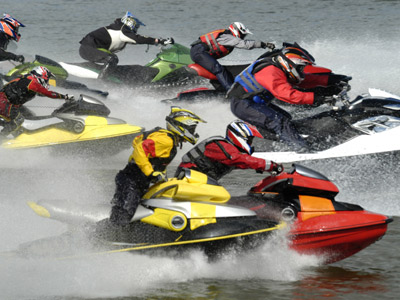 Personal watercraft use is viewed by many people as one of the worst activities out there for the environment. And while the environmental issues that surround PWC are numerous, the one that has really mobilized the "green" movement is the fuel problem. It all comes down to the type of engine employed in many PWC.

Until recently, all personal watercraft ran on two-stroke engines. Two strokes are notoriously bad for the environment for several reasons. First, they don't just run on gasoline; they run on a mixture of gas and oil. Burning oil is even worse for the environment than burning gas, because it doesn't burn very well.

Second, traditional PWC two-stroke engines are so inefficient they end up dumping up to 30 percent of their fuel into the water unburned [source: BWN]. In a single hour of run time, a 2000-model PWC will dump about 4 gallons (15 liters) of unburned oil and gas into the water [source: CO Parks].

Historically, PWC two-strokes have had no pollution-control devices at all. Before new U.S. Environmental Protection Agency (EPA) regulations went into effect in 2006, which require the engines to comply with the Clean Air Act of 1990, they were not required to have catalytic converters to limit emissions or to institute direct-fuel-injection systems to try to cut back on the amount of unburned fuel they release [source: VLRS].

These fuel issues aren't so different from other watercraft two-strokes, but PWC draw special attention because they're so popular and because purchases have grown so quickly over the last couple of decades. PWC growth far outpaces other watercraft growth.

In the last 10 years, since the PWC-related outrage of the late 1990s, the industry has made engine changes. Many PWC now have cleaner four-stroke engines, and lots of the ones that still have two-strokes have been updated to have direct fuel injection, catalytic converters and other pollution-control measures. These cleaner PWC are allowed in many recreation areas that have banned the older, dirtier models.

But dozens of recreation areas, including most national parks, still have a ban in place. That's because the fuel dumping is only a part of the problem. 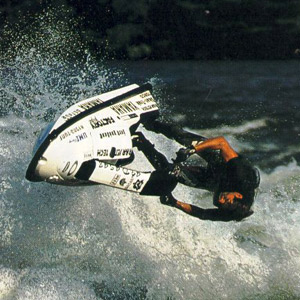 PWC also pose a threat to marine life such as manatees and dolphins.
Image courtesy of NOAA

The very nature of the PWC experience calls for eco-concern. Unlike regular boats, PWC are small enough to maneuver into narrow and shallow areas. This maneuverability is part of what makes them so exciting -- they're tiny, fast and you can speed them around spaces other watercraft can't go, like along coast lines and in small, typically undisturbed places. This means PWC riders are disturbing more wildlife than any other craft. Fish, birds, dolphins and even whales have been disturbed or displaced by increasing PWC use in once-protected spaces.

In Florida, there have been numerous cases of PWC running over engendered manatees, causing injury or death. Reports in Britain reveal PWC riders purposely harassing and even ramming dolphins at alarming rates [source: Independent]. (Admittedly, this behavior on PWC is related more to the specific sadists riding them and not to the device itself -- most PWC riders would never commit such an act -- but the maneuverability of the craft does make it easier for ill-willed people to act on their instincts.)

Other PWC environmental problems include extreme noise pollution from engines, as well as pollution from the gasoline additive MTBE. When the craft leak fuel into the water, MTBE tends to collect in shallow, shoreline areas, killing plankton and other tiny sea life that is the basis for many water ecosystems.

So are PWC environmentally doomed? It's hard to say. Manufacturers have made changes to the engines that make the craft less damaging to the environment. That, along with changes to levels of engine noise, could eventually get them back into some recreation areas from which they've been banned. But wildlife and PWC may never go hand-in-hand, and parks concerned for their sea life may never give the craft another chance.

For more information on PWC and related topics, look over the links on the next page.